Nadjet Bouda stands in front of a room of passionate, powerful, and vocal youth activists. She has organized and is helping to facilitate a workshop on how to apply a human rights based approach, something she has done dozens of times for different human rights and development organizations around the world. But this time is different; there is a resonance she hasn’t experienced before.

She has returned to her native Algiers and is speaking to the same youth organization she herself joined as a teenager. Looking at the group of young people in front of her, she can see herself in their faces and idealism. It conjures powerful memories of her past and the inception of her social justice journey nearly 20 years earlier. The feeling is indescribable. She is honoured, humbled and deeply satisfied to come full circle, back to her roots and where her story began.

Nadjet introduces herself as an Algerian Berber woman, an activist, a Canadian, and a feminist. Born in Algeria and growing up during the brutal civil war, she recalls being forced to leave her family home when she was a teenager,

“I witnessed so many atrocities, so much injustice. The war stole my youth and took away what should have been the happiest time in my life, but it also made me who I am today.”

It was actually the search for a platform to publish her poetry that led 16-year-old Nadjet to join the local youth organization, where she found herself drawn into an activist community. This experience was transformational for her and became the foundation of a life and career dedicated to advancing human rights, democracy and equality. The anger, idealism and passion she had poured into her poetry found a supportive space and she began to shape her future around activism, eventually pursuing the study of political science to further enhance her work.

She made the difficult decision to leave Algeria in her early twenties,

“I had never planned on leaving,” she says, “but I think I came to the conclusion that I was perhaps too idealistic for the conditions I was working within. Even with passion and drive, when there are so many socio-economic challenges it can be difficult to keep up the momentum.”

This search for new learning and new opportunities took her to the United Kingdom where she worked with Amnesty International, continuing to build her understanding of the global human rights landscape, and eventually, on to Canada.

It was shortly after arriving in Canada that she came across Equitas and the organization’s International Human Rights Training Program.

“I was really impressed with the methodology they used. The way they put the voices and experiences of the participants first, taking an equality approach rather than positioning themselves as the ‘experts.’ I knew this was an organization I wanted to work with right then.”

However, it would be a while before she found her way to Equitas and her early years in Canada were challenging and isolating. She struggled as her academic and professional experience was not recognized and her personal network was small. She took the jobs she could find, including working in a factory for a time, until she was offered a role with a women’s organization in Quebec, writing material on gender stereotypes and violence against women.

Through this work, she gained a new understanding of, and vocabulary to describe, some her own challenges including the racism she experienced as a Muslim immigrant woman in Canada.

“Working with community-based organizations in Quebec made me, for the first time, a feminist. Even though I considered myself so in Algeria, I never thought I needed to affirm and assert myself as a feminist,” she explains. 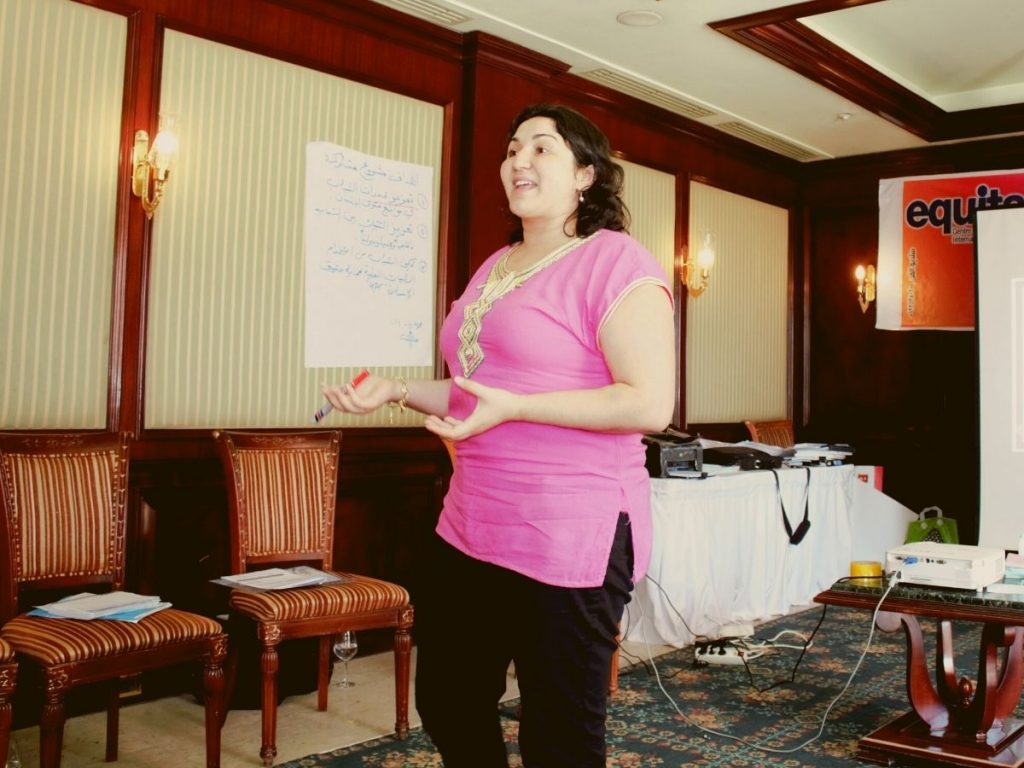 After a few years, and having overcome many personal and professional obstacles, she finally got the chance to join the Equitas team where today, she is the Senior Program Officer for the Middle East and North Africa region. In this role, she draws on her multi-faceted experiences as an activist to develop strategic relationships with partners, contribute to design training content, and support Equitas education program alumni to lead projects in their own countries. Currently, through Equitas’ Rawabet initiative, she supports the work of genuine human rights educators from Tunisia, Jordan, Egypt and Morocco to develop and implement actions aiming to promote social and economic rights in their respective communities using new technologies.

The embodiment of a global citizen : Nadjet is a woman, Algerian, Canadian, Muslim, feminist, activist, educator, poet, and social change leader. These diverse aspects of her identity that previously presented barriers are now woven together as she supports people around the world to harness the beauty of their own complex identities in creating real and positive change through grassroots movements.

Nadjet is a proud ambassador of Equitas and its unique ability to empower partner organizations.

“We are not here to save people, we are not the experts,” she explains. “The life and spirit of Equitas is objectively different. We show up with authenticity and listen to people, beyond the Program Managers and the funders. Together, we develop programs with the partner that builds on the power of people. Programs where the capacity of those concerned is at the heart of the social change we aim to realize.”

It is said we can never go home again. The spaces and places that were so indelible on our youth, simply no longer exist in the same way for us, in no small part due to our own transformations. We learn, we grow, we are wounded and we are healed. So when Nadjet returned to Algeria, she arrived changed by 20 years of life experience, lessons, and a renewed passion for helping others channel their power and use their voices.

Nadjet’s confidence in the power of people to change our world for the better is inspiring and her optimism for the future is tangible.

“It is easy to become discouraged and cynical when looking at what is going on around the world right now. It can erode hope,” she admits, “But then, I lead a workshop full of regular people – people from the middle-class, people who unfortunately did not have the opportunity to access higher education – who are taking the power and resisting. I know these people exist all over the world and they are all resisting in their own ways. This gives me hope again.”

← How the IHRTP Has Influenced Human Rights Educators in India
YWCA Young Feminists: Breaking Down Stereotypes and Growing the Feminist Movement →