By leading Community Action Projects (CAPs) in their communities all over the country, youth and young adults undertake actions that support respect for human rights.  Youth are given the opportunity to identify pressing issues in their communities and then, with Equitas’ support, launch projects and participatory activities to tackle these issues and contribute to building more inclusive and rights-respecting communities.  One of the CAPs supported by Equitas’ Speaking Rights program is Quebec City’s YWCA Young Feminists (YWCA Jeune Féministes) project. This project involves a group of twelve young women who are  using human rights education to highlight key feminist issues and to challenge myths and stereotypes surrounding feminism through popular education.

Engaging Decision Makers: A Trip to the National Assembly

The training and tools provided by Equitas on facilitating discussion and engaging with decision-makers came in handy for the first activity undertaken by the YWCA Young Feminists on their trip to the Quebec National Assembly. Upon invitation from a Minister, the YWCA Young Feminists presented a petition for equal pay at the National Assembly and used the opportunity to dialogue with decision-makers in Quebec government on a number of feminist issues that the young women felt legislators have not been addressing. For instance, the group was able to challenge the normative use of the gender binary by the legislature and its members when they spoke of “women’s equality.” The group explained to key actors at the National Assembly that the more contemporary and inclusive term “gender equality” encompasses not just male/female equality but ensures the equal enjoyment of opportunity and protection for all across the gender spectrum.

Popular Education is a tool that takes a horizontal approach to learning and centers participation, with its core values being a commitment to social justice and challenging structures of oppression. The YWCA Young Feminists created activities where popular education techniques would be used at cafés around Québec City to engage with community members and discuss feminist issues and break down myths surrounding feminism. According to Marie-Andrée Jean, the young woman leading the project, folks are often scared of the word “feminist” because of the stereotype that feminists are angry, so the goal of the CAP is to :

“demystify the myths around feminism… and show that feminism is accessible to everyone and that feminist issues are everyone’s concern.“

Since this part of the activity will take place at a coffee shop, it is designed to reach a diverse audience and to bring more people into the feminist movement. According to Marie-Andrée, the toolkits Equitas provides on engaging in conversations and hosting discussions on human rights, including the Speaking Rights toolkit, are key to these activities. The goal is to use these tools to address some of the feminist topics most shrouded in misconception, such as trans rights and the rights of sex workers. Though this project has been temporarily disrupted by the COVID-19 pandemic, the hope is that it will resume when public health guidelines allow for it.

Another strategy that the group of young women that make up the YWCA Young Feminists wants to use to make feminism and knowledge on feminist issues more accessible is through a partnership with the International Ethnographic Film Festival of Quebec (FIFEQ)*. Invited by the organizers of the event, the YWCA Young Feminists group is in charge of selecting films that showcase feminist themes. The group picked out a varied selection of movies they thought could highlight different feminist issues and engage with diverse audiences.

Through these education projects, YWCA Young Feminists is making feminism and feminist learning more accessible to a wider segment of the population, therefore bringing more people into the movement for gender equality. The tools and training provided by Equitas on human rights education and creating space for discussions on women’s rights are key to the success of these activities.

An Intersectional Approach to Feminism

For the group leading the YWCA Young Feminists CAP, incorporating an intersectional lens into all of their work and into feminist work more generally, is paramount. While all women and non-binary femmes face increased vulnerability to gender–based and sexual violence, Black, Indigenous and People of Colour (BIPOC) and trans women who sit at the intersection of multiple axis of oppression often experience violence at higher rates. According to Marie-Andrée:

“an intersectional perspective… adds another layer so that we are not just talking about white women but creating space for everyone to speak about their experience.”

Looking at who is considered a woman and who represented in the feminist movements is something the YWCA Young Feminists wants to continuously interrogate through their work. Internally as a group, diversity of members is key to promoting this value of intersectionality and maintaining a range of voices and perspectives.

Concerns about COVID-19 on women’s rights have to be looked at through an intersectional lens. Marie-Andrée emphasized that during quarantine, women with families are often overwhelmed with the additional domestic obligations imposed by lockdown, such as child care, and domestic violence has become more prevalent as women may be stuck home with their abuser with limited options for escape. Women are also disproportionately represented in professions on the frontlines of the fight against the virus, including in the healthcare profession, and therefore are exposed to the virus more frequently. However, communities with the highest percentage of BIPOC residents are most affected by the virus, therefore putting women in those communities most at risk. YWCA Young Feminists takes an active effort to ensure their feminist education is intersectional and to include all women in the feminist movement.

The group credits Equitas’ support as key for developing and undertaking their activities. The Speaking Rights toolkit and support offered by Equitas staff have contributed ideas and experience that have been indispensable to this project, according to Marie-Andrée. By empowering local communities with knowledge and capacity-building tools to identify issues in their community and undertake human rights education projects that are important to them, Equitas builds on community leadership and creates new leaders in human rights movements. 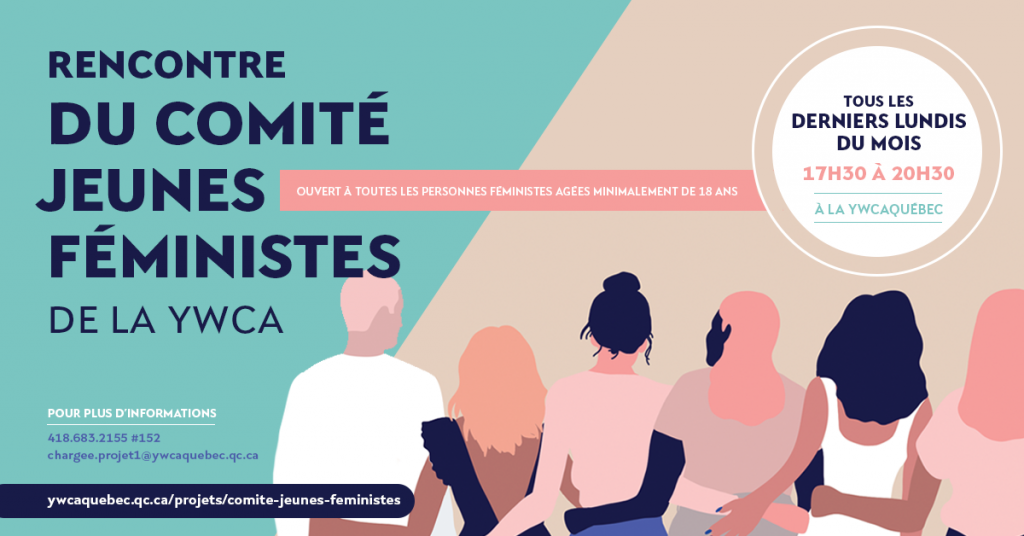 ← Meet Nadjet
Opening our eyes to disability: from the IHRTP to my research thesis →