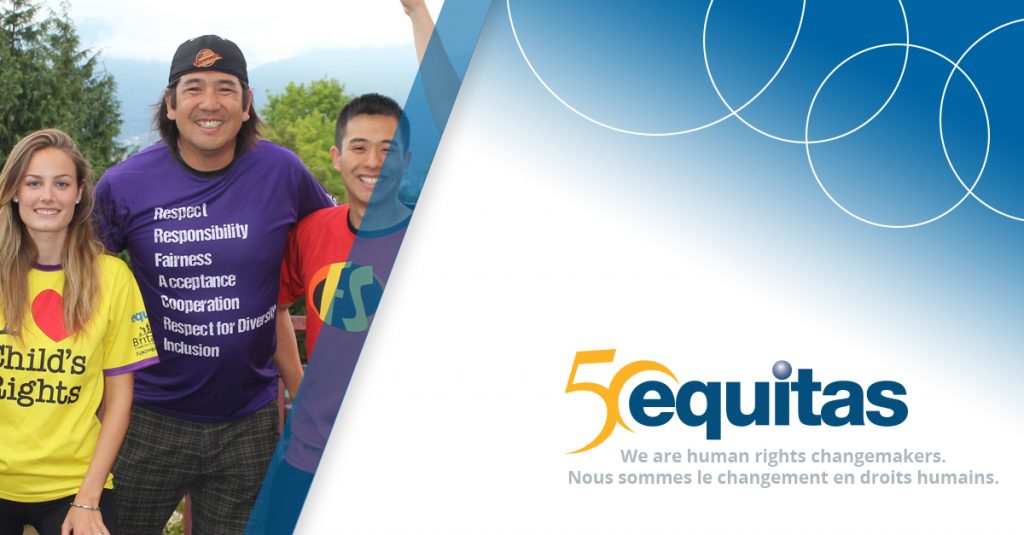 Sometimes life changes in the blink of an eye. For Tom Higashio, that moment came in 2006 when he attended an Equitas workshop in Vancouver, British Columbia, Canada, where he was a city programmer at the Britannia Community Centre. The workshop was a pilot project for Equitas’ Play it Fair! (PIF) — an innovative, youth program that uses play to create open discussion around basic human rights issues such as respect for diversity, co-operation, inclusion and fairness.

Although he admits that at first he hardly said a word, there was no denying the passion Tom felt growing with every passing moment.

“I was like a sponge.  Children’s rights — or lack of — affect everyone. I knew I wanted to find ways of reinforcing the positive values and fundamental principles of human dignity that allow all youth to be the best they can be… regardless of their economic, sociological, or ethnic background.”

The following year, Tom was one of four Vancouverites who were accepted for Equitas’ national PIF training in Montreal. Today, as Britannia’s Recreation Programmer of Youth, Tom heads up a team of expert facilitators who introduce children to human rights issues in a playful, non-threatening and supportive environment. Over 10,000 children aged 6-12 have now taken part in the program at Britannia alone — another 30,000 or more throughout other City of Vancouver community centres. Some have returned to Britannia as facilitators for the next generation. Others have become social workers, human rights journalists or teachers who bring it into the schools where they now teach.

Learning often takes the form of a spin-off on well-loved games that are played in schoolyards and backyards everywhere. Equitas gathered these traditions into a PIF Toolkit that groups activities by age appropriateness, then offered suggestions to open conversation and discussion.

“For example, everyone knows how to play Musical Chairs,” Tom explains. “We start the traditional way for two or three rounds. But after a few players have been eliminated — meaning they can watch but no longer participate — we invite everyone back into the game.” He can’t suppress a grin. “The twist is that we keep the same number of chairs and add some new rules — maybe something like having to keep one foot on the ground. The kids now have to collaborate to figure out how several people can stand together on one chair at the same time.”

After the laughter dies down and the game is over, there’s always discussion. How did children feel when they were ejected from the game? How did they feel when they were asked back? What changed when they realized that by working together, everyone can achieve success? It all leads effortlessly to the core question: if it hurts to be excluded from a game, how much more painful is it when someone is excluded in real life?

Play is such a fundamental cornerstone of the program that Tom incorporates it directly into the hiring process. “When we’re looking for team leaders, we gather all the candidates together and randomly have them lead or participate in games from the PIF Toolkit,” Tom says. “Right away, you can see who has the fire inside them already. It’s their passion and commitment that makes our program here in Vancouver so successful. They are the true superheroes, the people kids remember because of the positive impact on their lives.”

Always on the quest for new ways to bring human rights to the foreground, in 2014 Tom’s team was one of the first to bring Equitas’ new Speaking Rights program to BC. Designed for youth ages 12-18, Speaking Rights includes a series of four-day Diversity Camps that take place in locations like Manning Park or Camp Capilano in North Vancouver.

“Last year, four community centres each sent 10 participants, and the outcome was amazing — four small groups became one. Kids don’t have the same filters as adults so they ask questions from the heart… and they want answers. As participants shared their background and culture, they discovered that while there are differences, there are many, many shared values.”

Looking ahead, Tom sees a time when the Play It Fair! program is integrated into every community centre, school and day care. “The PIF Toolkit is powerful, and Equitas has been so proactive providing training for my entire staff. I want to see it available everywhere, so every child can know and understand their human rights and values.”