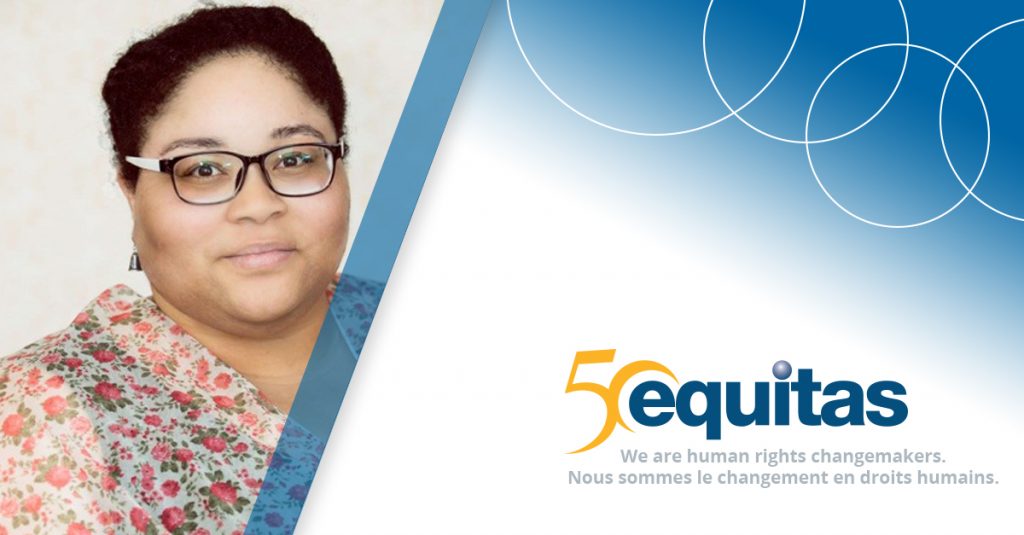 It is inspiring to learn how a shy Winnipeg girl, terrified of getting involved in a school club that fascinated her, has become a highly esteemed child advocate who speaks widely to and about youth in care about their rights to be heard. But that’s Marie Christian, and the more you learn about her story, the more remarkable you know she is.

The bedrock of Marie’s success is her deep-rooted love of children and her desire to help them become strong, empowered young people. It’s as simple as that. That passion and her hope to do something useful in the world led her to accept a position in 2001 with Right Way, a joint project of Save the Children Canada and the Office of the Children’s Advocate, within which she would help youth understand their human rights. “That [offer] blew my mind.  That’s what helped me overcome the public part of my shyness. You can’t facilitate a workshop if you’re too scared to look at anybody!”  Since those initial days, Marie has earned a BA, is currently working toward a BA of Social Work and frequently speaks publicly.

In her role as program director of Voices: Manitoba’s Youth in Care Network and local coordinator of Equitas’ programs in Winnipeg, Marie, now 36, is unwavering in her determination to ensure youth feel recognized and involved in decisions that affect their lives.

“Any child who doesn’t know their rights and how to speak up for themselves is a child at risk.” This is her first priority.

To achieve her goals, Marie draws upon Equitas’ programs, such as Play it Fair! and Speaking Rights, as well as home-grown initiatives. Several human rights workshops are offered, one based on an easy-to-learn version of the UN Convention on the Rights of the Child. Facilitators teach youth in care to remember “the 4 B’s”, namely that children have the right ‘to be healthy, to be safe, to be heard and to be themselves.’

Marie also manages programs developed based on emergent needs, such as one program inspired by a Voices scholarship student. While in care, the student was given medications to calm her, yet what she really needed was physical activity. Years later, this young woman went back to Voices with an idea. She raised the funds and offered a new program where youth could be physically active rather than being medicated. Clearly, Marie understands that no one knows a situation better than the one who lives it, and she acts accordingly.

“Whenever youth come in with an idea, we flesh it out and if we can, we’ll make it happen”.

Marie is a listener and a keen observer. What stands out in her approach is an acute awareness of children’s needs and adjusting programs accordingly. She notes there has been a huge shift in the overall child welfare environment over the years. For instance, not long ago their agency publication was called The Screamer, because youth in care felt they needed to scream in order to be heard. Today, she observes, youth know they have rights and a voice, and many agencies ask the youth in their care for feedback.

Young people are a lot more confident and many are able to speak up when they are facing challenges with their agency or caregivers. Thus, her focus has adjusted toward instilling responsibility in youth to use their voices to their advantage, speaking their truth, and seeing themselves as part of the solution.  One of the ways she teaches this is called ‘safe storytelling’, where youth are taught to share their stories “so that they’re making change, not putting themselves at risk or traumatizing their audience.”

Voices’ and Marie’s achievements are recognized government and public institutions. The story of one unfocused young man reflects the elements of her success. He had been in and out of ‘remand’ for years and came to Voices for help. They welcomed him unconditionally, listened and helped him articulate a goal to stay out of jail. Years later, it shows he met his goal. Marie demonstrates the importance of helping youth feel they are not alone by inviting them to consider Voices as ‘family by choice’, declaring, “We’re here for you as long as you need us and for whatever you need us.”  Marie is proud of Voices’ growing number of scholars, noting that they have been giving out scholarships since 2001. Today, their office walls display the names of youth who have pursued their goals to become lawyers, teachers, social workers and skilled trades people, to name a few. She envisions generations of young people in care growing into positions of influence.

The way child welfare agencies are now listening to those they serve is encouraging, she says. “We’ve worked long and hard to make sure kids have a seat at the table, that youth voices are heard and that their rights are respected”. Marie’s hope is that by sharing their message broadly and tapping into the strength of social media and word-of-mouth, she is getting the word out.

Marie credits Equitas in helping her develop personally over the years. Through participating in its training programs, she has learned valuable tools to apply to her work and appreciates the invaluable support of Equitas staff. Marie believes this sort of person-to-person exchange and support is “the foundation to a better world.” Through Equitas, she was also given opportunities to participate in and facilitate workshops at international conferences. She found the experiences “mind-boggling”. She met human rights educators and activists around the world, learning from their stories, their ideas and their different perspectives, enabling her to speak about child rights on a much broader and deeper level than before.  Furthermore, she gained an appreciation for having a mental refresh, learning about topics outside of the realm of child welfare.

It is clear the provincial government has confidence in Marie, through increased funding of Voices. Other organizations recognize Marie’s contributions as well. The YWCA/YMCA 2016 Women of Distinction celebration presented Marie with the community champion award and CBC Manitoba Future 40 nominated Marie as an up-and-coming achiever making positive contributions to Manitobans. Marie is also the recipient of the Children’s Rights Supporter Award 2015-16 by the Canadian Coalition for the Rights of Children. As Marie ponders her future, she says: “If there were ever another issue that pulls at my heart the way children in care does, I’d definitely want to pursue that.” For now, she remains committed to Winnipeg’s youth in care and they are fortunate to have her.