At the forefront of the fight for gender equality and women’s empowerment in Nairobi, Kenya is Virginia Nduta, Executive Director of Women’s Empowerment Link (WEL). WEL is one of the implementing partners of the Advancing Equality through Human Rights Education in partnership with Equitas – a project that strives to increase women’s participation in local decision-making structures based on the belief that gender equality in decision-making is essential to the empowerment of women.

As a women’s rights organization run by women, WEL is driven by the experiences and perspectives of those most affected by the issues they are working to address. Even before Virginia was familiar with the term “gender equality” and its implications, she observed human rights violations on a daily basis. In Kenya, 45% of women face intimate partner violence and only 9% of elected government seats are held by women, excluding them from important decision-making processes. Women who engage in economic and political activities often face gender-based violence at high rates, due to some people perceiving this as a threat to patriarchal gender roles. Seeing women denied of their rights and of opportunities instilled in Virginia a passion for human rights – a “passion that comes from experience and being able to work on the issues that [she experiences] every day.” The ambitious goal of seeing a world in which women and girls realize and embrace their rights is being tackled by WEL through the focus on three thematic areas: economic empowerment, transformative leadership, and the elimination of gender-based violence. 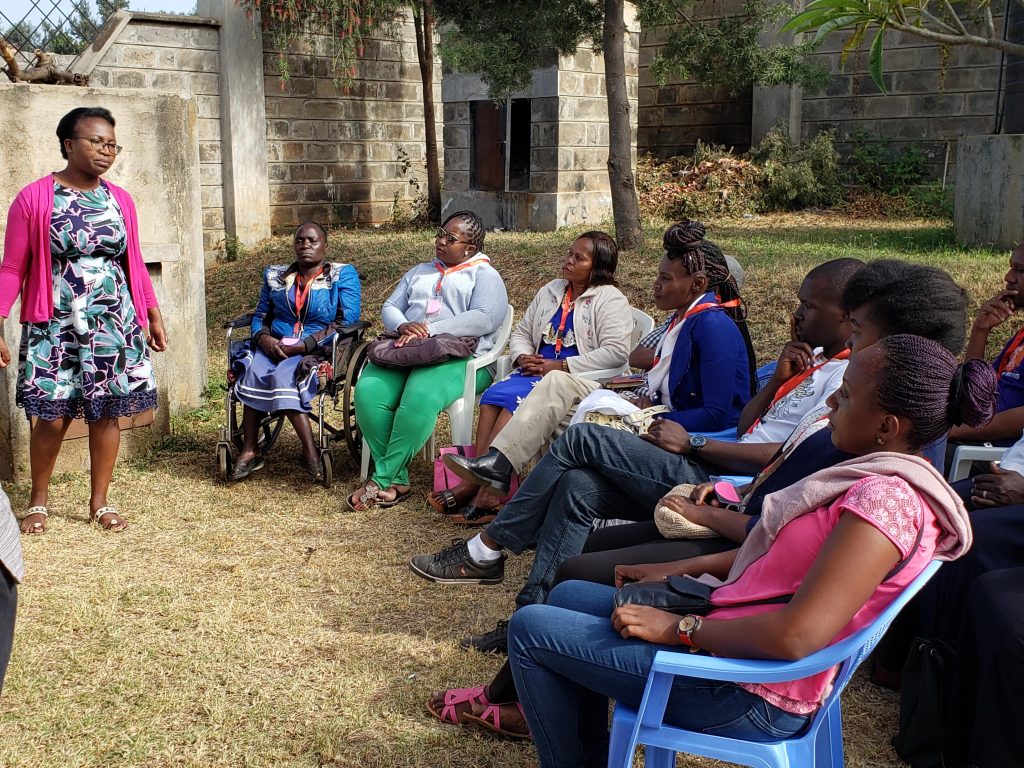 because, according to Virginia, many vulnerabilities that women face can be traced to a lack of financial independence or poverty. Through skills-building, such as employment skills or entrepreneurship training, WEL helps to build the capacity of women to become independent and to generate more choices for women.

The second thematic area, transformative leadership, recognizes the importance of having women in positions of leadership and governance. Through advocacy and education, WEL empowers women to break into spaces of leadership and influence politics in ways that challenge barriers to participation in existing practices, policies and norms. This aligns with the focus of the Advancing Equality through Human Rights Education project with Equitas, which focuses on increasing the participation of women and girls in local decision-making structures through training, coaching, and other capacity building activities, all guided by a human rights-based approach. The project also supports the implementation of community mobilization actions and the development of alliances among human rights’ and women’s organizations to influence key decision-makers in Kenya.

Finally, WEL is committed to the elimination of gender-based violence and the gender norms that perpetuate violence. Working with police and legal structures, WEL works to support survivors of violence and abuse and to end a culture of impunity regarding violence against women.

According to Virginia, the key is to “mobilize women’s movements to challenge gender norms that perpetuate violence.”

All over the world, the coronavirus pandemic has deepened inequalities and made vulnerable groups more vulnerable, which makes Equitas’ and WEL’s work not only more important, but more challenging. According to Virginia, intimate partner violence in Kenya has skyrocketed since the pandemic began. The combination of being isolated in a house with a potential abuser, with the additional financial stress caused by the effect of this pandemic on livelihoods, has led to much higher rates of violence against women.

Moreover, according to Virginia, human rights organizations in Kenya were not prepared to work in these novel conditions. With the reduced capacity of organizations and the increased need for their intervention, women’s rights are increasingly at risk. This makes her work, and the work of all women’s rights defenders, even more crucial in times like these. The importance of the fight for gender equality being advanced by WEL and Equitas through the Advancing Equality through Human Rights project has become glaring. This pandemic has demonstrated a need to empower women to take up decision-making positions in a way that creates long-term change so that, in the next crisis, women’s rights are not as vulnerable. 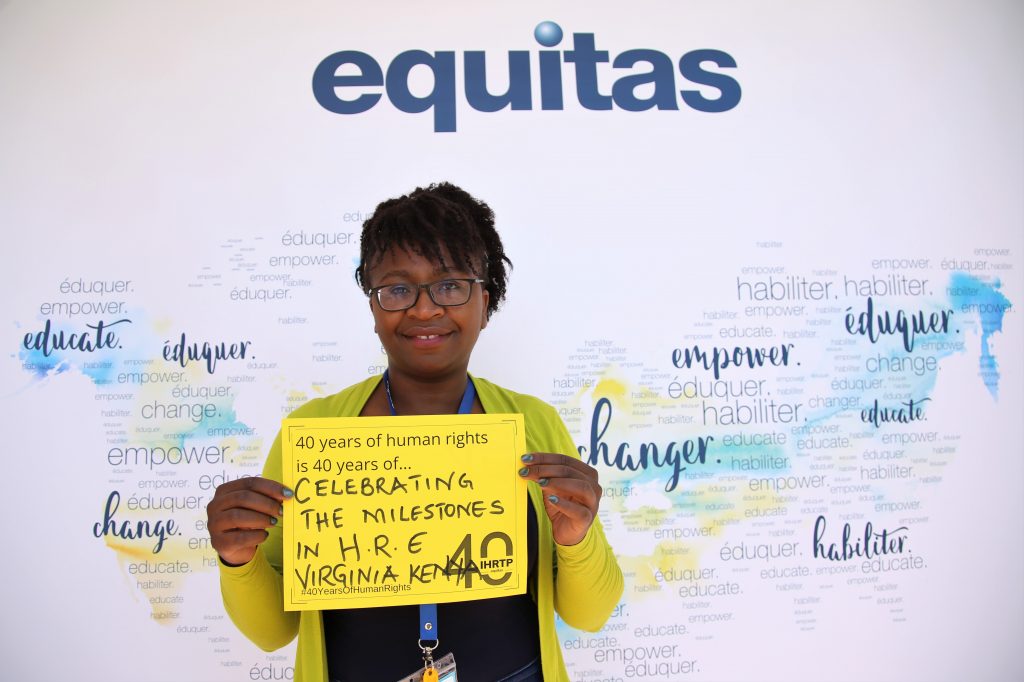 Virginia credits Equitas’ International Human Rights Training Program (IHRTP) with being an incredibly important and influential experience in her human rights education. Most impactful, she says, was learning about the human rights-based approach which is driven by the rights and aspirations of the people most affected by the issues trying to be addressed. Additionally, she notes that the “participatory approach is a key approach to mobilizing and programming around human rights”. Virginia incorporates these approaches into all three thematic areas of WEL’s work – ensuring that their projects are driven by the lived experiences of the women and girls who are targeted by these programs. An empowering approach to women’s empowerment, the human-rights based approach and the participatory approach throw the paternalism of human rights work out the window and centers women’s experiences as the driving force for combatting gender inequality. These are approaches that Equitas undertakes in all of its work.

Virginia encourages all human rights defenders to attend the training if they can – it is a space where there are “people from all walks of life and with different experiences, it is a space to network and open your worldview around rights.” According to her, the IRHTP improves the capacity of human rights defenders to become more inclusive leaders and effective advocates.

Continuing to Create and Inspire Change

The work of WEL has already had significant success and generated important changes in the country. In the area of gender-based violence, the organization played a key role in the passing of the 2015 Protection Domestic Violence Act, an important piece of legislation designed to protect spouses and children from violence and to combat a culture of impunity. WEL has also had positive results in their transformative governance and economic empowerment streams – their training programs have successfully led to more women in leadership positions in their communities and empowered women to seek financial independence.

Virginia’s three weeks at the IHRTP and her work in partnership with Equitas equipped her with the tools she needed to become a more effective leader in the movement for women’s rights in Nairobi. Through this training and her continued work with Equitas’ Advancing Equality through Human Rights Education program, she continues to make a real difference in the lives of women in Kenya by empowering women to become changemakers. 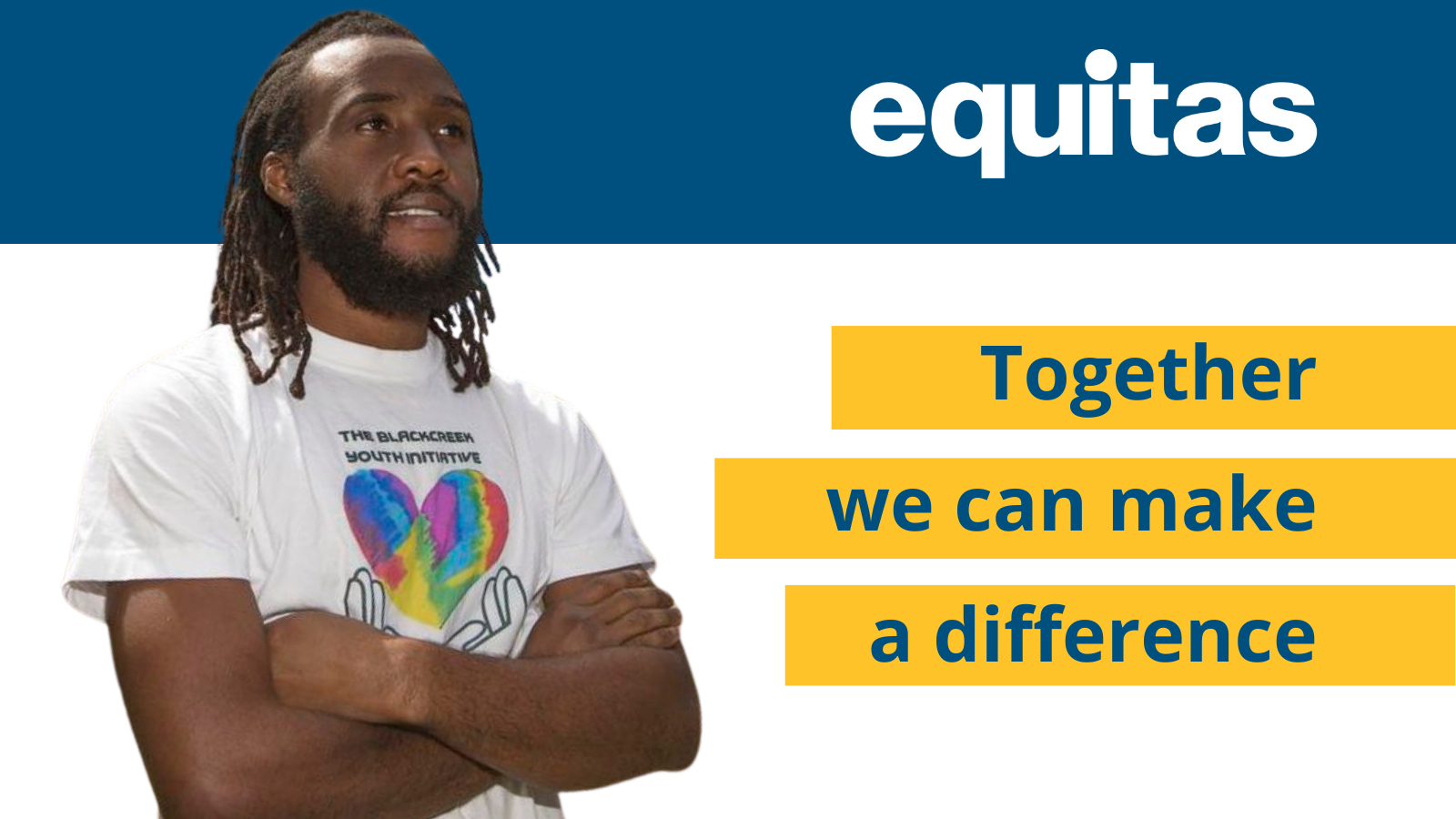 ← The Youth of Rawabet in Jordan: The Story of a Transformative Journey
Confronting Patriarchy and Advocating for the Rights of Muslim Women in Uganda →