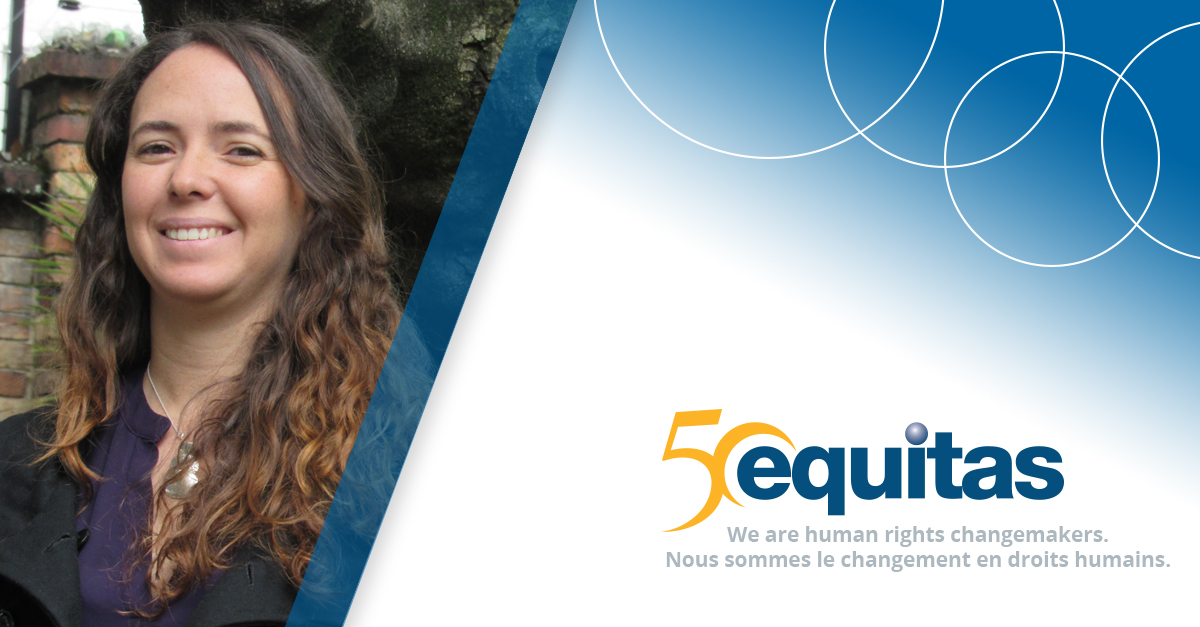 Adriana Correa was born into conflict. In her homeland of Colombia an armed conflict has been going on for 52 years with more than 220,000 dead—81 percent of them civilians, according to ¡Basta ya! of Centro Nacional de Memoria Historica, the National Centre for Historic Memory, or NCHM where Adriana serves as communications coordinator.

Though Bogotá, the capital, where Adriana has lived most of her 32 years, was spared the violence, elsewhere citizens mourn the murder of multiple members of their family, and women still search for their disappeared children. Some eight million people have been displaced. What began as a campesino guerilla conflict opposed by the government, according to Adriana, led to paramilitary operations against the guerillas; eventually both sides seem to have been corrupted by drug cartels and other illegal activities. Between 1995 and 2003 the violence escalated, with thousands of civilians estimated massacred, mostly by the paramilitary forces.

In 2005, a framework known as the Justice and Peace Law was created. It offers a legal path to demilitarization and justice and reparations for the victims. Among the mechanisms was the establishment of the NCHM.

Raised by a father whose law degree sensitized him to human rights issues, Adriana grew up keenly responsive to her father’s awareness of the needs of the poor and vulnerable. She studied communications in college, then took a master’s degree in philosophy, spending six months interning in Aguachica, a town in a region greatly impacted by paramilitary groups. “I was studying philosophy, ethics, and human rights, but seeing the reality was shocking and overwhelming—and reinforced my desire to work for those who weren’t as lucky to be born in Bogotá,” she says.

The NCHM is primarily engaged with collecting testimonies of the serious human rights violations from victims of the conflict. The aim is to offer truth as a reparation for both the victims and the society as a whole. Since most victims were members of vulnerable populations, without access to education, they often didn’t know how to claim their rights, notes Adriana. She adds that this gathering of testimonies and research will also aid in understanding the origins of the conflict and its consequences. These documents, along with information from the government, community organizations, demobilized people, and the media, will be deposited in a human rights archive being created by the Centre, which is also planning a museum reflecting on the conflict and its impact.

In 2012, Adriana participated in Equitas’ International Human Rights Training Program; in 2015 she co-facilitated the same program. While the training in human rights issues added to her background in communications and philosophy, the participatory model she learned at Equitas changed the way she connected with others during human rights trainings. Previously, as a member of an international organization and then a government official, she used an “expert” model. “We weren’t starting with peoples’ experiences and adapting to what they needed.” Rather they would teach what some expert thought they needed.

“Today, we start with the people, with how they want their stories to be told—not what we want them to say, not what the government wants.”

Much of Adriana’s work involves making documentaries and short videos, radio programs, even comic books, all telling the stories of the impacted individuals and communities, seeking to highlight their experiences through traditional, digital, and social media. These are distributed locally, and sometimes also internationally. Since the conflicts were outside the major cities, informing people in Bogotá and elsewhere brings the nation together.

She can see the impact of this work when it is the Centre that members of the media contact after issues related to the conflict arise, and when people flock to the events the NCHM creates and its social media followers increase.

Still, the future is uncertain. The national peace agreement plebiscite of October 2016 revealed the deep polarization of the Colombian society. Adriana says the situation remains fragile and complex: “The victims that we work with would rather have agreement with FARC, even if imperfect, to stop fighting with arms. The No movement doesn’t want the guerillas to participate in politics; those who say yes would prefer fight with words.”