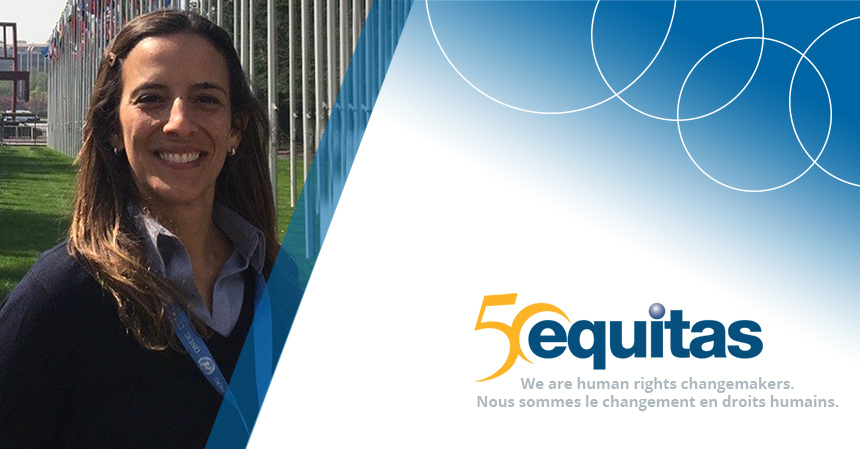 From the homeless of Joinville in Brazil to the United Nations in Geneva, Fernanda Brandão Lapa brings the message of empowerment through human rights education (HRE). Her work transforms life for people at every level: the street, the school, the city, the nation, and the world.

An attorney with a doctorate in education, Fernanda interned at the Inter-American Court of Human Rights in Costa Rica and taught classes in order to make an informed career choice. She chose human rights education, concluding, “In the law, there is a violation, and the lawyer minimizes the bad effects. In education, you effect a transformation. You cannot change the past, but you can change the future.” Fernanda co-founded the Institute for Development and Human Rights (IDDH) in 2004, a non-governmental non-profit organization in Joinville, a city of 600,000 in Santa Catarina, Brazil. She received help from Equitas, participating in the International Human Rights Training Program.

“This was the first time, in several international training experiences, that I felt I fit in. It focused on educators, not lawyers and activists,” said the educator-attorney.

The Institute’s first project trained lawyers and NGOs, arming them with knowledge of international human rights. In its tenth year, half of the training’s participants are from the government—judges, lawyers and officials. “Today, they make use of international treaties and mechanisms in their work,” says Fernanda.

The IDDH began pushing in 2006 for a national HRE plan for officials, journalists, police, and school students aged six to fourteen; for all formal and informal education. They accomplished the bold National Plan for Human Rights Education (PNEDH) through lobbying the government for implementation in specific places. Lapa became one of the five non-governmental representatives on the National Committee on Education in Human Rights. On the ground, achieving the support of the local Secretary of Education, the NGO began designing materials and training teachers.

Lapa returned to Equitas in 2011, with a scholarship from the Canadian government, to work on a curriculum that is still in use in 80 local schools. The participatory educational method created by Brazilian Paulo Freire is used in Brazil with popular education, informal teaching in the community. As Fernanda was immersed in the same methodology in her training at Equitas, she had an aha moment, realizing that “We could use a participatory approach within the schools to teach human rights!” As a result, school teachers in training with IDDH are now participatory learners, creating their own human rights participatory activities for use in the classroom.

Fernanda states, “Education continues to be the key for social change. Everybody should have the access to education, including human rights education: values, empowerment, non-discrimination, equality… it’s the only way to decrease human rights violations.”

She seeks help for implementation from principals, teachers and professors at all schools.

Another successful outreach is to the homeless. “We are a busy economic centre here, but Joinville’s homeless told me they would never go to a legal office. So we asked the legal office to go to the homeless.” Dr. Ceilo John, Chief of the Public Defenders Office, agreed. The public policy now is to pop up an office with its banner waving in the streets once a month, for the homeless who need access to justice in civil and criminal matters.

After four years of effort by IDDH and Brazil’s leadership, the countries of MERCOSUR, the common market organization of Argentina, Brazil, Paraguay, Uruguay and Venezuela are writing a human rights education regional plan this year. Fernanda’s NGO has not stopped there. She lobbies the United Nations for a declaration about human rights education and training. Her vision is that this must include indicators for evaluation. “I still go into a school and do not see any evidence that human rights are being taught,” she says. “The UN will want reports, and countries will need to evaluate the outcome of their plans.”

Lapa also continues to teach. She is Professor of Human Rights and Public International Law at the Law School of the University of Joinville Region (Univille) and Coordinator of its Human Rights Clinic. A former yoga teacher, she meditates and practices hatha yoga. Snorkelling is also a family hobby, as is travel. “We love getting to know different cultures, and their food. We all cook,” she says. But for this inspired educator, “My biggest enthusiasm is seeing people change, the transformation expressed when they suddenly say Wow! I never thought of that!”