As news about the plight of the millions of refugees continues to shock Canadians, one question keeps coming back: what can we do to help in Canada? We hope this series will inform us about the effects of this crisis on refugees and the important role human rights education can play in creating a welcoming environment in Canada for people forced to flee their homes. We invite you to share the following articles on social media to inspire your family, friends, neighbours and colleagues and reflect on the actions we can all take to build inclusive, equitable and respectful communities.   This is the second article of the series. Read the first article  by Kathleen Weil, Quebec Minister of Immigration, Diversity and Inclusion, here > / Ayman Al-Yassini RSD Expert – United Nations High Commissioner for Refugees (UNHCR) in Ankara, Turkey Former CEO/Executive Director of the Canadian Race Relations Foundation 1. Alienation, uncertainty, dislocation: refugees face these emotions on a daily basis. What is the impact of displacement on a person’s sense of identity? Refugees are individuals who escape their country because of a well-founded fear of persecution for reasons of race, religion, nationality, political opinion or membership in a particular social group. A refugee is someone who either cannot return home, or is unwilling to do so.  History has shown that displacement of individuals and communities is commonly employed as a weapon of war and conflict.   “Cleansing” territories of ethnic or religious rivals, for example, has become in recent years a popular tactic for sectarian militias in Iraq and Syria.  The use of these measures has enabled governments and groups to assert control over contested areas, monitor restive populations and engage in social engineering as a part of state/group led initiatives. In the process of displacement, many individual and collective identities are shattered.  Scholars, most notably Edward Said, have captured the essential link between displacement and identity politics.  Displacement constructs and shapes identity, as we have seen, for example, in Kurdish nationalism in Turkey and Sahrawi identity in North Africa. Since identities are mostly territorially based, being violently uprooted can lead people to cling to their identity and communities. However, refugee identifies are complex and formed not only by internal feelings, beliefs, ethnic and cultural traditions, but also by external factors such as the experience of resettlement, cultural traditions and the economic, political and social conditions of the new host country.  The resettlement into new social, cultural, economic and political environments can be disruptive to the identity of refugees and their sense of belonging in their host country.  Social and economic markers of “us” and “them” will increase the alienation of refugees, and reduce the process of identity reformulation to a shattered existence. Fortunately, our experience of welcoming refugees in Canada has been reasonably successful. NGOs and individual Canadians have worked with earlier refugees to build a new life, resettle with dignity, and become an independent and productive member of society. 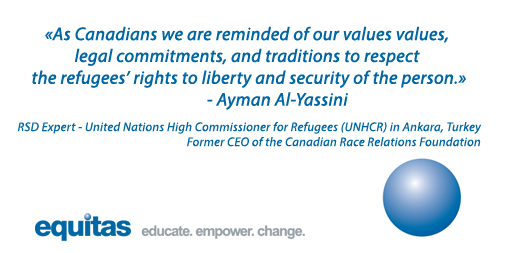 2. What are our individual and collective responsibilities, as Canadians, in welcoming refugees? As Canadians, we are reminded of our values, legal commitments, and traditions to respect the refugees’ rights to liberty and security of the person. All levels of governments have a responsibility to welcome refugees through legislation, policies or commitments.  As individuals, our actions need to encourage and support communities to take action at all levels to raise awareness of the plight of refugees, and engage communities in taking action to support refugees.  Our responsibility to act today is both collective and individual. In addition to all levels of governments, NGOs, the labour movement, cultural communities, social service providers, health practitioners, the family, and the general public have an important role to play in refugee resettlement. Evidence from Europe and Canada indicate that many citizens are ahead of their governments when it comes to responding to the plight of refugees. Soccer clubs in Germany set up training academies to engage the recent wave of refugees in their new country. Austrians have turned out at railway stations. In Iceland, more than 15, 000 people joined the “Syria is calling” Facebook page, many of whom apparently offered to house a refugee. Thousands of Canadians urged the government to expedite the admission and resettlement of Syrian refugees. However, successful resettlement needs more than favourable popular sentiment. It needs an effective combination of resources provided by both the public and private sectors. Forget the language of burden, and remember who we are! It is important for us as Canadians to remember that our contribution to refugee resettlement is relatively moderate compared to some other countries. For example, Turkey is hosting approximately 1.9 million Syrian refugees, and Jordan has received more than 600, 000, and Lebanon over one million. Canada has taken only a small number during the past four years of the Syrian civil war. There is disconnect between need and response, which is uncharacteristic of Canada as our values and history are based on welcoming those in need. 3. How can human rights education be a tool to help us better understand the issues underlying the refugee crisis we are facing today, and how can it help us in our actions to ensure the dignity of refugees and the respect of their rights? Human rights education is essential to active citizenship in a democratic and pluralistic civil society. It helps us understand the challenges faced by refugees, and other vulnerable persons, including women and children, and recommend solutions. Learning about human rights is an empowerment tool to enable individuals and society to promote social justice and produce changes in values and attitudes. It promotes social solidarity across issues, communities and nations. More importantly, human rights education develops in individuals and the collectivity critical thinking to make choices based on democratic values. Human rights education shapes our understanding of the universe, including events in Syria, Iraq, or Afghanistan.  It will also enable us to have a better understanding of our own lives—our government, communities, families and personal experiences. Human rights education, empowers us to see the universe through equal opportunities and respect of the rights for all human beings, including refugees. In the Canadian context, it means accepting refugees by providing them the necessary environment to build a new life through mutual respect. 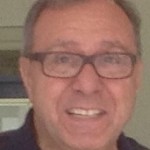 Over the years, Dr. Ayman Al-Yassini held a number of senior positions with Canadian governmental and non-governmental agencies. Currently, he is with the United Nations High Commissioner for Refugees (UNHCR) in Ankara, Turkey (2012-2015), as RSD Expert. Prior to the UNHCR, he was CEO/Executive Director of the Canadian Race Relations Foundation (CRRF) in Toronto (2006-2012), a crown corporation. He served the Immigration and Refugee Board of Canada (IRB) as Member and Coordinating Member in the Quebec region, and Coordinator of the Middle East geographic team (1994-2006).  His other appointments include his mandate with the Canadian Chamber of Commerce as Director of International Trade, Executive Director of the Canadian Social Science Federation, and Director of Program Development at the Canadian Bureau for International Education. Ayman is a graduate of Loyola College of Montreal (BA honours), and McGill University (MA, Ph. D).  He served as President and Board member on a number of voluntary boards, including the Canadian Commission for UNESCO, and the National Council on Canada Arab Relations. Currently, he is Chair of the Board of Directors of the Association for Canadian Studies.