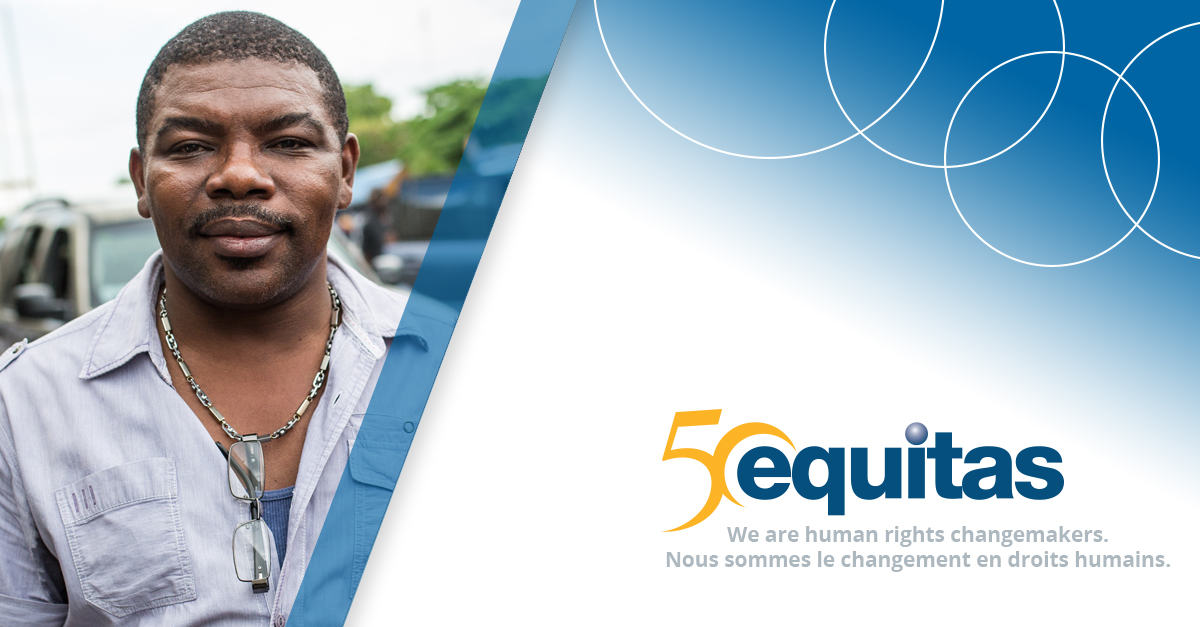 Patrick Camille lives in Haiti, where he has been working in the field of human rights for nearly twenty years. In 1994, after being a teacher, Patrick Camille began studying law. “For a young Haitian, it was a way of guaranteeing high income” he explains.

However, a class on human rights made Patrick and his comrades aware of potential for their studies to have a social impact. Thanks to his teacher, Patrick Camille realized that “a country where socio-economic rights are not respected, where the State has no social program for its population, which has no access to employment or Education – is a failed state, whose population can only be vulnerable.”

It was then that the training lawyer realized that “working for human rights is essential to help redress the situation of the country”.

This epiphany drove Patrick Camille to join the Platform of Haitian Organizations for the Defense of Human Rights (POHDH), whose mission is to monitor human rights violations on a national level. This was the first step on the path to defending human rights, which Patrick has remained on ever since.

Patrick Camille participated in the Equitas International Human Rights Training Program (PIFDH) for the first time in 2002. Following this experience, Patrick and his team remodeled the training program offered to citizens responsible for identifying violations of human rights in their communities, with the goal of making the program more accessible.

After reworking his training methods, Patrick Camille saw more and more people coming forward about human rights violations,  a success that he attributes to the fact that activists had developed a greater sensitivity to human rights.

“It’s one thing to teach the conventions and mechanisms of human rights, but to make activists and citizens feel truly committed to it is something else.”

Patrick returned to Montreal in 2004 to participate once more in the IHRTP, but this time as a co-facilitator. This new collaboration with Equitas has strengthened his leadership skills for implementing the projects of the Group of Support for Returnees and Refugees (GARR), a Haitian organization in charge of helping Haitian deported from the Dominican Republic.

Patrick Camille’s work within GARR consists of reintegrating the returnees while encouraging the solidarity and cooperation of the local population. The organization also helps the internally displaced victims of the 2010 earthquake and has launched a human rights training program. After 7 years with the GARR, Patrick Camille has expanded the projects, committed to fight against human trafficking and to the protection of children.

Today, Patrick is a Civil Society Advisor for the The Justice Sector Strengthening Program, which is implemented by Chemonics international in partnership with USAID. As a human rights consultant, he worked with the Social Welfare and Research Institute between 2015 and 2016, creating training modules inspired by what he had seen at the IHRTP and producing an institutional evaluation. He is also a professor of international human rights law at the Port-au-Prince Magistrates’ College.

In addition to these roles, Patrick Camille is also a partner of Equitas in the Citizen Engagement Program, implemented by Equitas in collaboration with twenty human rights organizations in Haiti. This program is the source of the “I commit, together we build” toolkit, an accompanying tool enabling Haitians to participate in the reconstruction of their country. Patrick Camille trains the coaches to use the kit for promoting citizen action in communities.

This project was essential for getting rid of the passive image that the victims of the earthquake have been given, and has enabled many Haitians to overcome their discouragement and remedy to the situation themselves. “People were waiting for state intervention, NGOs, external aid … This program enabled the population to take responsibility for getting the country back on its feet: the kit has helped to train 55 coaches, who themselves have worked with 1,600 community leaders “.

Patrick Camille’s enthusiasm for sharing the success of this initiative is contagious. From a civic awareness-raising campaign on hygiene to preventing the spread of cholera, to the action of women determined to fight the unsanitary conditions in prisons, the initiatives born from the program “I commit, Together we build” have had concrete results and its impact keeps on growing. Patrick Camille proudly states that “these projects led to other civic actions that we weren’t used to seeing in the communities”. In total, more than 100,000 people have benefited from local community action projects.

In Port-au-Prince, Patrick Camille brought together young people from both underprivileged and wealthier backgrounds to identify ways for improving community life in sensitive neighborhoods. Through thoughtful collaboration, the young people took the initiative to clean the streets and to educate the inhabitants about the importance of protecting of the environment.

“When we see young people cleaning up the street, we think first of the cash-for-work systems put in place after the earthquake, which paid the inhabitants for repairing and cleaning,” says Patrick Camille . “This was not a system that promoted citizen engagement. Yet, with the citizenship program, young people have learned to distance themselves from the idea of financial compensation and to really take part in improving life within their neighborhood. “

What matters most for Patrick is the self-esteem that this project has built for these young people. “They felt that the others were starting to see them as role models, and that was extraordinary for them because it was the first time they could assert themselves as leaders of their community.”

Patrick Camille’s life is made up of his passionate commitment to the defense of human rights and an unfailing support for community-based initiatives. But where does this desire to help others come from?

Patrick Camille did not grow up with his biological parents. He grew up living with his godfather’s family, which he sees as a starting chance since they had the means to send him to university. His childhood allowed him to understand the situation of other children raised away from home but who unfortunately did not have this chance to have a host family to look after them and give them all the affection they needed. This awareness of the vulnerability of others is also what has pushed him to continue working for human rights.