Rawabet means “Connections” in  Arabic. This initiative empowers youth, women and marginalized groups – in particular persons living with disabilities – to thrive in the digital era and use new technologies to promote social and economic rights in Jordan, Tunisia, Egypt and Morocco.

Read this article in Arabic.

Since the beginning of the COVID-19 pandemic, the Tunisian government has issued constant communications to inform Tunisians of how the situation was progressing and the protective measures to be followed. Deaf and hard of hearing people were excluded from these communications as sign language interpretation and subtitling were not provided. We are talking here, according to unofficial figures, about a segment of the people who numbers 70 thousand to 200 thousand people, while the official numbers of the National Institute of Statistics estimated their number in Tunisia in 2014 by more than 20 thousand people. It is only thanks to civil society mobilization, including the Deaf community and Tunisian sign language interpreters that the Deaf and hard of hearing community were able to obtain basic information concerning COVID-19. Despite all efforts, simultaneous translation of the official addresses of the President and the head of government still have not been provided. A one-hour interview scheduled with the head of the government on April 19, 2020, was announced only the day before, and no one was surprised to hear there would be no measures to ensure accessibility. 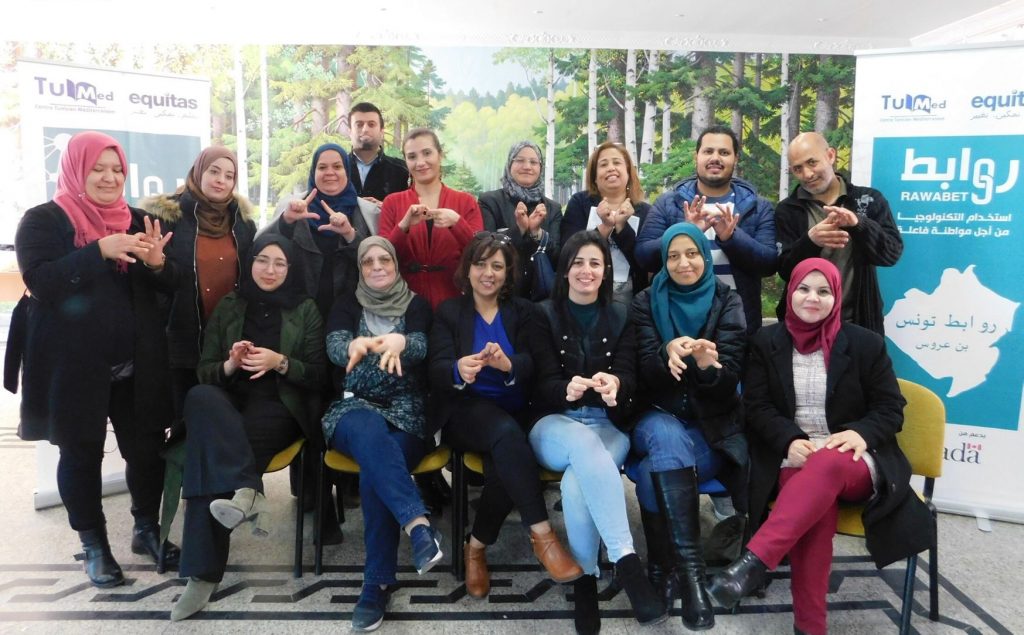 Concerned by the invisibility of Deaf people in Tunisia and by the denial of their right to access to information, the young people of Rawabet decided to act, supported by TUMED Center. The human rights educators began organizing via a Facebook Messenger group conversation. An idea quickly emerged from their exchange: they had to make visible what had been rendered invisible and put pressure on the media and the government to implement this right.

Within 24 hours, despite the general lockdown, they used the technological means at their disposal to invade the social media with the demand for a Tunisian sign language interpreter. The Rawabet youth created several hashtags during their Messenger conversations with messages such as:

#الحق_لنفاذ_المعلومة_للجميع “access to information is a right for all”

On 18 April 2020 at 11:30 pm, comments on the Rawabet young people’s initiative started pouring in. They contacted their human rights network contacts, associations of the Deaf, and even families and loved ones took part. Word quickly got around, and the next 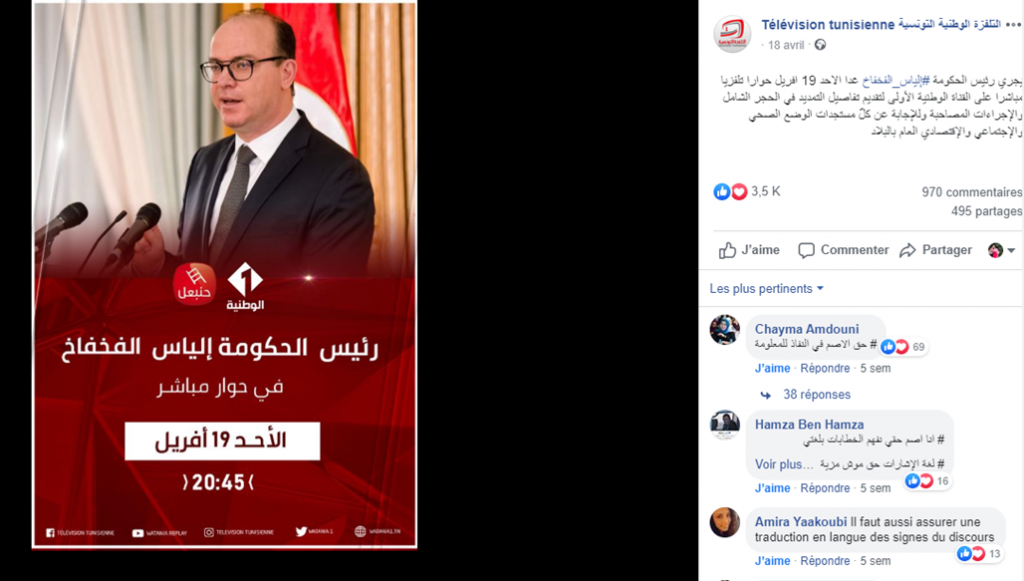 morning, a Deaf person made a Facebook video call asking the Deaf community to join the online campaign. This was followed by a call from a young sign language interpreter and member of the Rawabet group. In a Facebook video she then explained how to proceed. In a few hours, hundreds and hundreds of comments showed up on the national TV channel web page announcing the interview with the head of the government. New hashtags appeared, created by Deaf people themselves, mainly “انا_اصم_حقي_نفهم_الخطابات_بلغتي#” which means “I am deaf, I have the right to understand speeches in my language.”

Three hours before the broadcast, we learned that, in contrast to the past, the speech of April 19, 2020 would be simultaneously interpreted in sign language on live TV. It was enormously satisfying to witness this online campaign initiated by Rawabet youth put pressure on the government and support the advocacy carried out for years by Deaf people’s organizations, and more recently by associations of sign language interpreters, to ensure Deaf people’s access to information through Tunisian sign language. The success of this campaign is mainly due to the Deaf community’s impressive mobilization of a massive information operation and the invasion of social networks.

As a result, a mere few days later, on April 23 2020, and for the first time in Tunisia’s history, the President of the Republic’s speech was simultaneously translated into sign language.

← International Day Against Homophobia, Transphobia and Biphobia in times of pandemic: Equitas sounds the alarm
Protecting Youth Rights in a Pandemic – A space for learning, awareness, and support – Workshop →