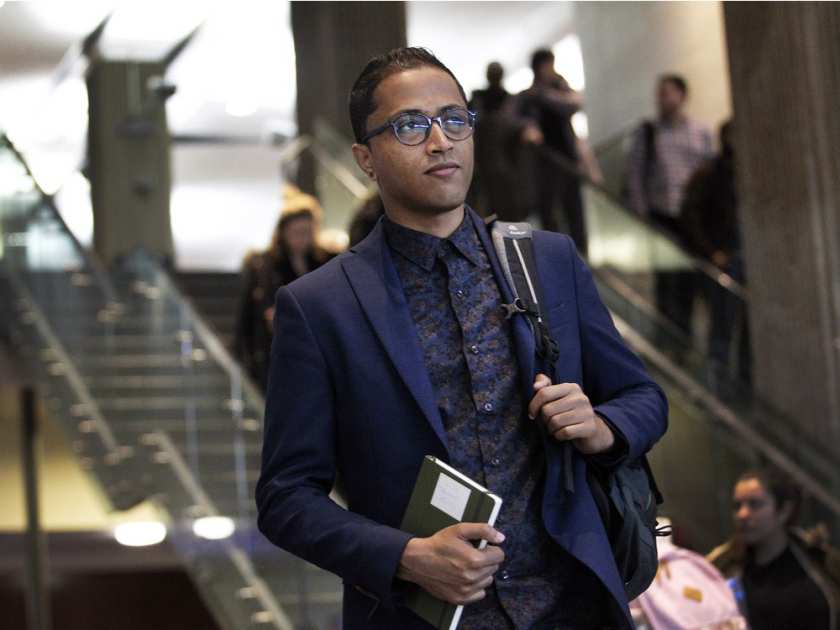 Yemeni university student Ala’a Jarban had been abroad for almost a year on a United Nations fellowship when the Arab Spring began in Tunisia in late 2010 and he decided to return home. “I knew there would be protests in Cairo as well, and we decided to do something,” he said. Yemen’s autocratic president, Ali Abdullah Saleh, who led the country for more than 20 years, wanted to modify the constitution so he could remain in power, said Jarban, and people were being imprisoned for opposing the government and talking about human rights. “I knew, from the time I was a kid, that I wanted to change things,” he said. Their protest started small, with just 12 students on the campus of Sana’a University in the capital city of Sana’a, where he was studying political science, but it grew. Jarban, now 25, came to be known as a key figure in the youth movement, leading protests and connecting with activists on social media. “I worked on the side, with other young people,” he said. “I had a blog during the whole revolution and I wrote in English.” He wrote several posts in which he said the revolution would not be complete until people were free to express their sexual orientation — and in one of those posts, he came out. (Jarban identifies as queer, not gay. “Queer means different. Queer for me is a political term,” he said.) The post was translated into Arabic. “Most of my previous posts didn’t have that many readers,” Jarban said. “This one went viral.” In accordance with Yemen’s Shariah legal system, sexual activity between members of the same sex is illegal. Punishments range from flogging to death, and LGBT people are often discriminated against and ostracized. “Many people I knew in Yemen found out about the post, and I started receiving countless death threats.” Many with whom he had taken part in the Arab Spring movement disowned him, as did family members. “It was a very difficult period,” said Jarban, who now lives in Montreal. When the post went viral in the summer of 2013, he was a participant in a highly regarded program organized by the Montreal-based human-rights organization Equitas. The program brings people together from human-rights “hot spots” around the world and trains them as educators and activists. Jarban realized he could not return to Yemen. With help and direction from Equitas, he searched out organizations that help refugees. He applied successfully for refugee status, took government French courses for a year and then found work last year at the People’s Potato, a vegan soup kitchen at Concordia University. At the end of September, he received permanent resident status; in January he started as a full-time student at Concordia, where he is continuing his studies in political science. He is connected to local organizations that work with refugees and LGBTQI (lesbian, gay, bisexual, transgender, queer and intersex) people. “Here, there is so much openness,” he said. Jarban will be the guest speaker at the 2016 Equitas Gala for Human Rights, to be held at the Rialto Theatre on Thursday, Feb. 11. “Equitas is like my family,” he said. Previous guest speakers have included Lt.-Gen. Roméo Dallaire and Nobel Peace Prize laureate Muhammad Yunus. The conversation will focus on themes of diversity, inclusion and identity; Caroline Van Vlaardingen of CTV Montreal will moderate. Proceeds and donations from the gala, which raised more than $100,000 last year, support the work of Equitas in communities in Canada and around the world. AT A GLANCE The 2016 Equitas Gala for Human Rights, Right(s) Before Your Eyes, takes place Thursday, Feb. 11 from 7 to 11 p.m. at the Rialto Theatre, 5723 Parc Ave. Tickets cost $130 and are available at equitas.org or by calling Sawsan at 514-954-0382, Local 299. Tuesday, Feb. 9 is the last day on which tickets can be purchased.