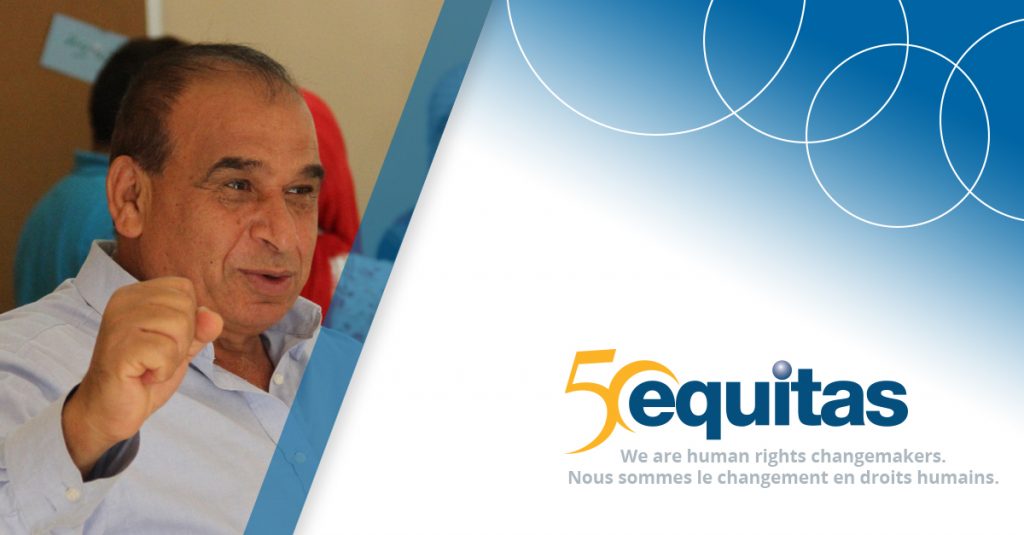 “I have a strong belief that human rights education is the path to development, the path to peace, and the path to common understanding among nations,” says Khalil Radwan.

Khalil was born in Hebron, West Bank, and is now living in Jordan. He worked as a teacher for the United Nations Relief and Works Agency (UNRWA) for Palestinian refugees, before becoming the school supervisor for Arabic languages. In 2000, UNRWA established a human rights education program and appointed him as the program supervisor. He supervised 167 schools in Jordan. In 2008, he was promoted to Regional Advisor for Human Rights Education for schools in Jordan, Syria, Lebanon, the West Bank and Gaza. There they established a unique program they called Human Rights, Tolerance, and Non-Violent Conflict Resolution at Educational Institutes. He left UNRWA in 2013 and is currently working independently with several NGOs in Jordan, including the Jordan Center for Civic Education and the Arab Network for Human Rights and Civic Education.

While with UNRWA, Khalil was proud to have established school parliaments in UNRWA schools which enabled students to practice their rights to participation. At the time there were quotas that limited the number of women in Parliament. By educating girls to know their rights and responsibilities at an early age it was hoped that they would later stand up and ask for their rights. After elections at one of the girls’ schools, a girl who had been elected to President of the parliament after much effort, took her position very seriously and wrote a letter to the President of the Jordanian Parliament asking for a meeting for her and her colleagues to share experiences and to discuss problems. Khalil facilitated their mission and the meeting occurred. The chief of the Jordanian Parliament was astonished by the girls’ knowledge of and thoughts on public issues. Another of Khalil’s students later arranged a meeting with one of the King’s representatives. Some of the girls have now graduated from university.

In 2014, Khalil participated in Equitas’ International Human Rights Training Program (IHRTP) in Montreal, Canada, a three-week training with human rights educators from around the world. “I have learned a lot from Equitas, their materials and methodology, how to plan professionally, and how to organize large workshops. I learned to use a participatory approach in the right way. Whether as a trainee or as a trainer working with NGOs, in most of the activities I conducted I have used these techniques and developed some new techniques, and the result was better than expected.”

There are many Syrians living in Jordan and many of the children had poor attendance at the schools. After the teachers started applying Equitas techniques taught by Khalil there was an increase in school attendance. The children said they started to love school again. About this success he says, “I consider myself as a change agent. I feel that the new generation will be more enthusiastic in their support of human rights.”