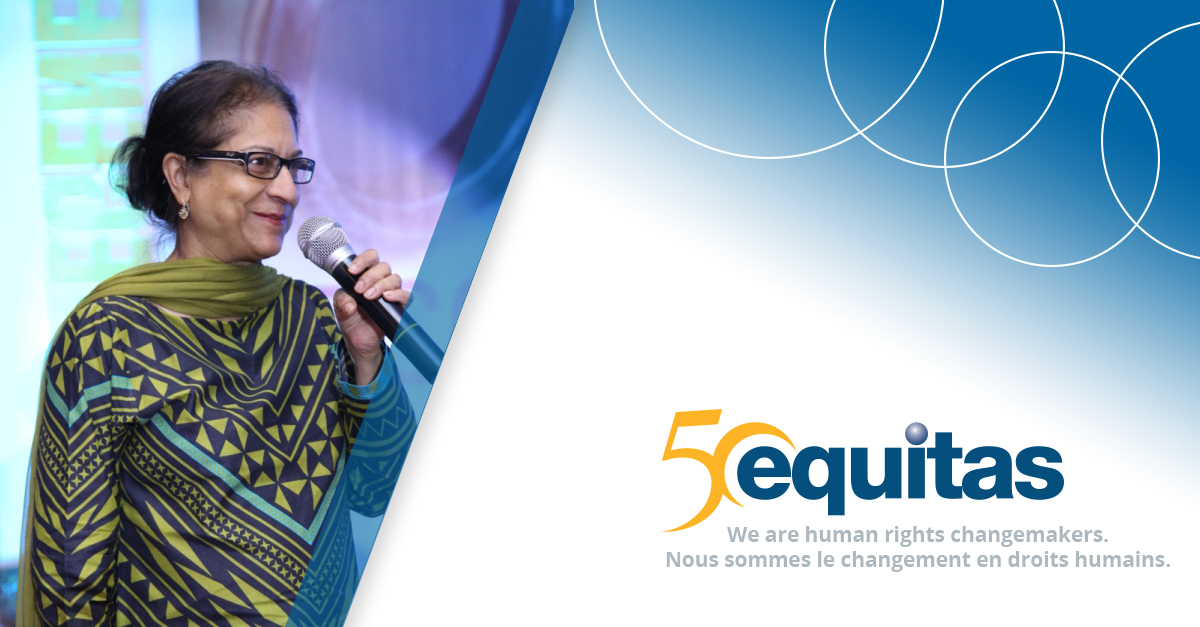 Asma Jahangir has been a prominent human rights lawyer and activist in Pakistan for the last 40 years. She learned the importance of freedom of expression early on in life, as her father was a political prisoner. When she began practicing law in early 1980, there were few women in court and there were no women judges on the bench. Today, as a renowned lawyer in her country and internationally, Asma remembers the patronizing attitudes she encountered from judges when she first began her career.

Asma has always been the first on the line to defend what many in Pakistan would call the “lost causes”; women who have been raped, battered wives, victims of acid attacks and individuals convicted of blasphemy. Freedom of speech and expression related to blasphemy and a perceived lack of respect for religious symbols are crimes punishable by death. Human Rights Watch reports that 19 individuals remain on death row who have been convicted of the offence and hundreds are awaiting trial in Pakistan. Most people affected by this law are religious minorities and do not have proper access to legal counsel. Arrests for these charges typically receive a great deal of media coverage, which often leads to tension between religious groups. Some of the accused have been killed before trial or forced to flee the country in order to avoid unfair punishment. Pressure is also put on judges and they are sometimes attacked for their decisions.

“Everybody needs a defence, especially when the charges are unfair to the accused. For example, a young boy no more than fourteen years old was falsely accused of blasphemy for doing a graffiti with a religious connotation.”

This is why Asma has defended many of these cases, regardless of the personal risks and the negative press she has received.

Asma has visited Canada many times in the last 25 years and participated in Equitas‘ International Human Rights Training Program (IHRTP), in Montreal in the early Nineties. That experience inspired her to continue working for a fairer and safer world. “I realized that I was not the only one fighting and it gave me strength.”

“Introducing women to civil society is a way to empowerment”

During the 1980’s, Asma and her friends co-founded the Human Rights Commission of Pakistan. One of its current goals is to raise awareness about human rights abuses in her country and to monitor the attacks on basic rights. “Development requires more rights for the people and strong institution building.” Asma has also worked with the United Nations for twelve years as the Special Rapporteur on Freedom of Religion and earlier as Special Rapporteur on Extrajudicial Executions, travelling back and forth between Pakistan and Geneva, Switzerland to report on the matter.

Human rights education is also part of Asma’s day-to-day work at her law firm, which includes working on legal aid cases and training future lawyers to learn from their more vulnerable clients. “It is important for law students to get an understanding of human rights values.”  Her career as a prolific lawyer and jurist has been based on truly knowing the individuals she represents. That’s the key lesson she tries to pass on to future generations of jurists.

For Asma, informing people about human rights gives them a voice.

“Every ordinary woman can become an activist. Introducing women to civil society is a way to empowerment.”

This women’s rights activist sees the difference it makes when women gain access to knowledge about their rights. “They can denounce abuses at the police station and create communication and solidarity between women.” Women’s rights have always been at the center of her activism, as she has organized many women’s marches and founded the first all-female law firm in Pakistan.

Standing up to keep respect for human rights alive

Honor killings are another battlefield of Asma’s. They are still practiced in Pakistan and neighbouring countries, and put women’s lives at great risk. In December 2016, Noor Ayeza was sentenced to death in the name of honour in a village where those killings are still permitted. Asma turned to social media to denounce the situation and call the government to action. On December 10th 2016, celebrated internationally as Human Rights Day, Noor’s life was saved because of the pressure put on the government. “Girls are not property and today, we can use technology to get women connected and safe.”

After a career promoting democracy, respect for religious minorities and women’s rights, she became the first woman president of the Supreme Court Bar Association of Pakistan. This role, as well as the many awards she has received throughout her career, come as a recognition of the hardships Asma had to face during her life as a human rights defender. Her initiatives for equality and inclusion always received a lot of opposition in Pakistan, and she has had to face house arrests, death threats, defamation and even assassination attempts, but this has not prevented her from fighting for her beliefs. No wonder some have called her the “gutsiest woman that Pakistan has”.