Creating a space for sexual minority women in Nigeria

“If I tell you that I am not afraid I am a liar. I am afraid, I am really really afraid. There is nothing like bravery in this work. But it is what it is. If you die you die, if you live you live, that’s how we see it now.” These are the heavy words LGBTQI rights activist Akudo Oguaghamba uses to describe her work in her home country of Nigeria. Akudo, an Equitas International Human Rights Training Program alumna and founder of Women’s Health and Equal Rights Initiative (WHER) in Nigeria, works with the organization to empower women through health and human rights education and the creation of safe spaces and peer support groups for sexual minority women in the community. Nigeria’s government has notoriously worked to pass legislation to criminalize any type of activity associated with LGBTQI rights. They did so most recently with the passing of the same sex marriage prohibition act (SSMPA) in January 2014. The SSMPA imposes possible prison sentences for anyone who enters a same-sex civil union or marriage, as well as anyone who associates with any type of organization, club, or venue that caters to the LGBTQI community.

In a recent poll conducted by Nigeria’s NOI polls, in partnership with the Initiative for Equal Rights (TIERs), 90% of Nigerians said that the country would be better off without homosexuals, and 81% said that they do not believe that homosexuals should have the same rights as other Nigerian citizens. Growing up in a rural community, Akudo felt the isolation that many women in Nigeria do when it comes to discussing both LGBTQI rights and women’s issues in a highly patriarchal society. “Before I moved to the city in 2007, I used to think I was the only one who was actually really gay, the only woman who is actually really gay,” she explained. Following her move, she struggled to find a place for women to meet. That is what prompted her to work with other women in her community to create a space to share and learn from each other’s struggles, questions, and experiences. Together, they carried out a community needs assessment for sexual minority women, and from that moment on it was clear that a space for discussion was needed. Human rights education

WHER places a large emphasis on educating the community. The organization holds workshops, lectures, and other community events, bringing people together.

At the beginning, WHER did not even have an office. In fact, the meetings were held in Akudo’s home, which she shared with her partner. This put a big target on the couple’s backs, as neighbors began to ask questions and grew aggressive. 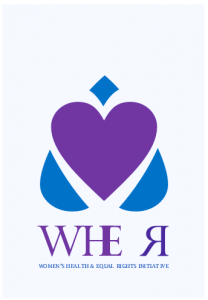 It became increasingly difficult following the passing of the SSMPA, and WHER’s public campaigning against the law. Akudo says she is thankful for the help of an organization from the Netherlands, Mama Cash, who supported WHER with a grant worth $25,000. This enabled them to set up a proper office space.

“This place is supposed to be an office where we also hold activities, but because of the need for women to have a space, they can just walk in and sit down. They know that this is our space, it’s like a home,” Akudo explained.

Following her training with Equitas during the IHRTP this June, Akudo has brought back a wealth of knowledge and tools with her to WHER.

“I always believe in steps, I believe in global social change, but I also believe in the smallest changes that can happen around us,” she explained.

She believes that there is nothing wrong with starting small and building slowly, especially in a young and blooming organization. She plans to train her colleagues using the Equitas participatory approach which she became familiar with during the IHRTP, as it creates a more inclusive, open, and welcome learning environment for all. This approach puts the experiences and knowledge of the participant at the center, and builds upon it through interactive activities. Each participant is given a voice, and these voices contribute to everyone’s learning experience.

During the IHRTP, Akudo also learned about the importance of civil society and self-advocacy, and how it can help in building a sustainable movement.

“It is not only going to be me all the time, we need to equip other people to be able to speak,” she said. “Advocacy for the people, by the people.”

WHER hopes to offer this type of empowerment in the future by continuing to offer more workshops, and opening up its doors to allies of LGBTQI people. The organization will be having its first workshop geared towards this part of the community this year.

“Allies have questions too, they are being discriminated against as well. If they don’t have the right information they won’t be able to fight for us. So we want to start having sessions with our allies to understand their comfort zones, what they know, and what they want to know,” she explained.

Next up, workshops with families of LGBTQI people, which Akudo says is a very delicate process. It needs to be done with care and precision.

Overall, Akudo hopes to continue building the capacity of WHER, despite the harsh environment her and her colleagues are working in. She believes that women need to be at the forefront of change in her country.

“When you’re talking about gender equality, if you do not settle the issues of women you have not even started. In the fight for the rights of LGBTQI rights, if women are not included, it might not [have an impact],” she said.

Akudo’s participation in the 2015 IHRTP was made possible thanks to the generous support of the Canadian High Commission in Abuja, her organization (WHER), and Equitas, through a contribution agreement with Foreign Affairs, Trade and Development Canada .

← Pushing boundaries and changing the norm: the fight for gender equality
Empowering youth: giving a voice to our future →