“Why are you doing this? Why can’t you do something more conventional, something more acceptable by society?” Those are the questions often thrown in the direction of Salini Sharma, a human rights activist in India. Sharma, an Equitas International Human Rights Training Program (IHRTP) alumna and Engineer by trade, works as a Program and Outreach Officer with Safecity, an organization that addresses sexual violence in public spaces. After graduating with a bachelor’s degree in Biotechnology, Sharma worked in her field, but was also volunteering many hours with local NGOs. An engineer by day, human rights defender by night, she gave as much time she possibly could to the cause.

“If you look at engineering in my country, it is very male dominated. In that space I started reflecting on my identity as a woman, mainly on why we are on the receiving end of so many biases,” she said.  “You question yourself a lot, by critically examining your surroundings, you’re also really pushing yourself to think, ‘can I change this?’ And that’s when I got involved.” 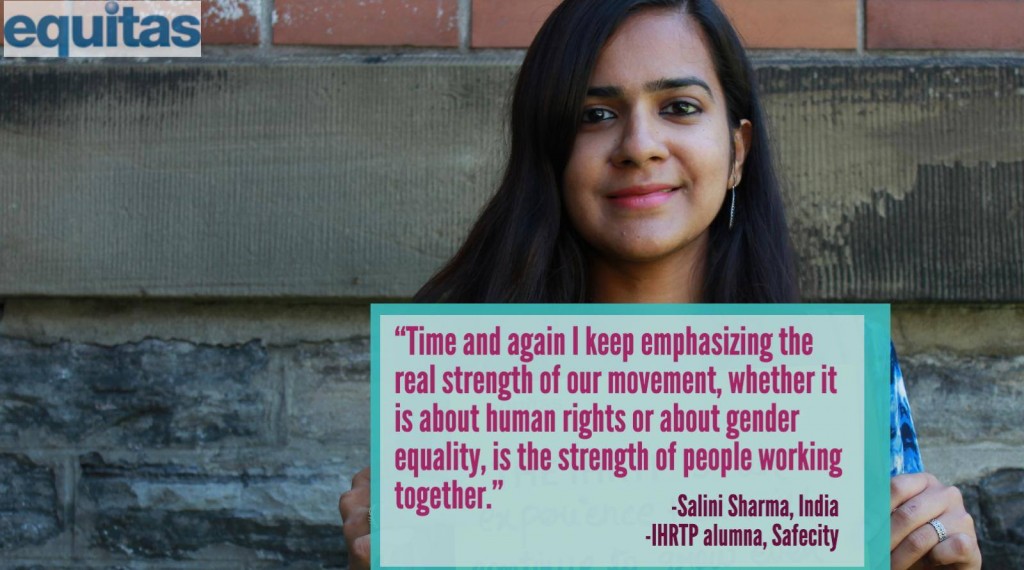 Safecity “pins the creeps” Safecity provides a range of tools and an online platform that allows the community to come together and speak about what is usually swept under the rug. People can anonymously report incidents of sexual violence through Safecity’s website, by email, or through volunteers in the community who will then input the data for them. They also have plans to launch a mobile application. Safecity uses a unique system that is visually telling of the current situation in India, a crowd map. Women can report cases of ogling, groping, staring, unwanted comments, and even rape, by region, time, place, date, and location. Their reports show up anonymously on the crowd map, appearing as pins that allow other users to see hotspots flagged by people in the community. Each type of harassment is color-coded.

“We have over 5,000 reports with us right now in our database and we have one of the largest crowd maps in the world on this issue,” Sharma said.

This type of data accumulation is to ensure that the organization pinpoints real, concrete, and long-lasting solutions to the issues at hand. Sharma says that there is not one universal solution to the quandary related to sexual harassment. Be that as it may, looking at each neighborhood’s specific issues allows the organization to design campaigns relevant to them, affecting positive change by encouraging community leadership that can lead to sustainable change. Educating, empowering, enabling Upon returning home from the IHRTP, Sharma is determined is continue her work. With her she brings a new arsenal of knowledge and tools, as well as a fresh perspective. She says that the IHRTP allowed her to delve deeper into the concept of the global culture of human rights.

“It is not really a part of our curriculum. These conversations are not really encouraged. Our media does not really focus on it, so this is my time to understand the implications and consequences of the context of human rights in one country, and how it influences it in another country, or how we all are in the same bowl of human rights,” she said.

Another important issue for Safecity is urban planning, especially the absence of public toilets and poor street lighting. These issues have been observed in low-income neighborhoods of Lal Kuan and Uttam Nagar, where Safecity is active.  Sharma says that women often have to travel long distances to secluded areas and dense forests to relieve themselves, putting them at risk of being harassed. Often, to avoid this danger, women go late in the evening or early morning when there are less people around, holding back their system and bringing on a slew of medical issues, including an increased risk of contracting UTIs.

“If the absence of public toilets is making women more vulnerable to abuse, then we can lobby with the local municipal authorities to open up the toilets, because a lot of times these toilets are there but they are under lock and key,” she said.

This was the case when Sharma worked in a low-income community in Lal Kuan during a three-month long Safecity campaign in 2015. After speaking with locals, and seeing first-hand the state of the public toilets, Safecity worked with journalists and the local Gender Resource Center (established by the State Government and supported by Plan International) to campaign to have the spaces opened for use. They shared their data with the district officer, which resulted in the immediate opening of one of the community toilets, and its continued maintenance. Sharma believes it is important to take time to reflect on these cases and on her role within her organization. It gives her a chance to understand what practices have worked and haven’t worked when it comes to leading campaigns and obtaining results. She took that time for reflection when she made the trip to Montreal a few weeks ago to take part in the IHRTP.

“I am really hoping to take back mechanisms and strategies that I have learned during the IHRTP with Equitas, but also from the other participants, their real life experiences, their challenges, their success stories, and their best practices,” she explained. “I am trying to close the loop. If I learn something here [with Equitas] how do I translate it back to my work back in my country?”

Empowering the community Safecity works with people of all ages in schools and colleges, targeting the up-and-coming generations. They also work in corporate settings, facilitating trainings on sexual harassment in the workplace, increasing gender consciousness among employees, as well as letting people know of their role and responsibility to create a safe environment for all.

“We do a lot of workshops on sexual harassment awareness, rights, gender identity, gender roles, understanding gender, and creating gender friendly spaces. We customize our workshops for different age groups and the different settings we are working with,” Sharma explained.

Safecity also makes a point of ensuring that the community is as involved in the process as possible, coming together as a civil society. It’s about designing campaigns that are sustainable, have an impact, and can be owned by community members.

“The beauty of the campaigns is the limited resources required. We’ve managed to break the myth that you need a lot of money to bring change in your neighborhood by successfully running effective campaigns in Lal Kuan with community members,” Sharma said. “We work with a lot of local NGOs, which are already working in areas that align with our social mission, so the idea is not to start something from scratch or absolutely new, it is to build on what already is happening.”

Salini Sharma’s participation in the 2015 IHRTP was made possible through a contribution agreement with Foreign Affairs, Trade and Development Canada.   By Casandra De Masi, Winter-Summer 2015 Web Editor and Communications Intern at Equitas

← #RefugeeCrisis – A. Al-Yassini: ‘Our responsibility to act today is both collective and individual’
2015 National Child Day Celebrations All Across Canada with Equitas! →