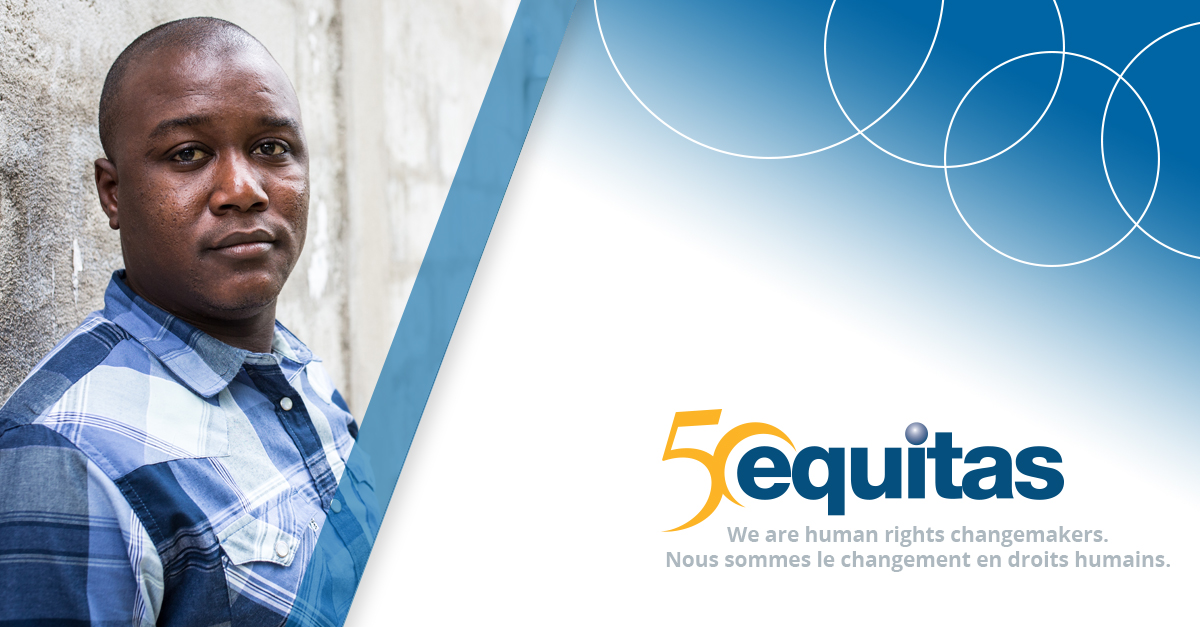 Being gay, lesbian, bisexual, transgender or intersex in Haiti is not easy; violence — either physical or psychological — is part of everyday life. In spite of all the challenges, threats and discouragements, Kouraj President Charlot Jeudy continues his work to raise awareness within Haitian society for the rights of LGBTI communities (lesbian, gay, bisexual, transgender and intersex).

The Haitian association ‘Kouraj’ has set itself the difficult goal of fighting homophobia, violence and exclusion, and promoting the rights of LGBTI people, known in creole as the “M” community (Masisi, Madivin, Makomè, Miks, Monkompè). A difficult mandate indeed, considering that the organization has been the victim of three attacks in the last five years. One could say that ‘Kouraj’ truly lives up to its name!

Kouraj is the most visible organization that defends and promotes LGBTI rights in the country. It offers much needed free legal support to people who face homophobic violence and engages in dialogue with many public and private institutions, while putting a great amount of effort into changing attitudes and fighting prejudices, which are widespread across Haitian society.

From “agitator” to “facilitator”

Every action undertaken by Charlot Jeudy and his organization reflects not only the needs and concerns of the LGBTI communities, but also a deep understanding of the necessity for dialogue between different social groups. As such, nothing is done without discussion.

Charlot Jeudy became fully aware of the importance of collaboration after participating in Equitas’ International Human Rights Training Program, in Canada, in 2013. In his own words, he went from being an “agitator” to a “facilitator” between the LGBTI community and Haitian society. He came to realize the extent to which participation and inclusion are essential conditions for the success of an intervention, regardless of differences in opinion:

“After meeting Equitas, I had to rethink my personal approach to LGBT issues. It helped me understand that I have a certain way of seeing the situation, which might not be shared by everyone. You have to discuss with others in order to reach an agreement… even if it’s on our disagreements!”

This was also the moment he started speaking of LGTBI rights as being a part of human rights as a whole, which has allowed him to work in collaboration with other civil society organizations in Haiti that work on wider human rights issues. As he so aptly puts it:

“Human rights are not a buffet where you can choose what you like and leave what you don’t. It’s a package, a whole”.

The organization had to eventually go through a moment of introspection. The training offered by Equitas made the members realize that there was a lack of representation of lesbian women and transgender people within Kouraj. The association now makes sure to include them in every decision, which only helps to increase the LGBTI communities’ strength and unity.

Having an impact despite the taboos

The results of Charlot Jeudy’s actions speak for themselves. Today, the members of LGBTI communities in Haïti come together more often. They are more confident, and have a greater desire to be involved and meet with each other. The media also began a more active engagement with the issues, despite them still being taboo and more than a dozen stories on the subject have appeared on TV and radio in the last five years. Kouraj has naturally become THE reference on LGBTI rights in Haitian media. In fact, the organization wants to create its own radio station to increase its capacity to convey positive messages about LGBTI communities.

But fighting for LGBTI rights doesn’t come without some disappointments for Jeudy. Between the lack of engagement within Haitian civil society and inadequate approaches imposed by some international organizations, the challenges are considerable. Added to all this are the weakness in the justice system, hate speech, and lack of political will, which all contribute to undermining the protection of LGBTI rights.

One could be tempted to throw in the towel when faced with such adversity, but Charlot Jeudy continues his struggle. His determination and his “kouraj” enable him to play a crucial role in strengthening the movement against homophobia and for the respect of LGBTI people in Haiti!