Awa Diouf, a former participant of Equitas human rights trainings in West Africa, snapped a photo of Thérèse Faye at a meeting in Senegal to serve as a symbol of the change women in the country want to see. It is a symbol of a brave woman using her voice and speaking her mind, in what can otherwise be a hostile and unwelcoming environment.

Faye is a member of the village of Sao in Senegal. She took part in human rights training sessions held by the Union des Radios Associatives et Communautaires du Senegal (URAC), an organization that brings community radio together in Senegal. Local radio stations that are linked to URAC were formed by community associations dedicated to improving economic, social and cultural development. This includes promoting education, and the effect it can have on local democracy. URAC serves as the force that brings them all together to work towards this common goal.

“This woman participated in many of our URAC meetings. She followed us everywhere, and she gained the courage to organize this meeting you see here, and that’s what we wanted,” Diouf said.

This photo was taken in the lead up to an election. The women had gathered to talk about good governance in the village; voicing their concerns, needs, and wants.

Diouf felt the need to snap a photo because this is not a common sight.

“When you look at this photo you see it’s a woman facing people, but when we usually go around to meetings and events, the men are in front and the woman are pushed to the back,” she said.

She believes that sharing photos that depict these scenarios is a good way to reach the community. For her it is a way of showing that the fight for human rights and women’s rights is not over, and it’s a step towards making this the norm.

Awa believes that giving women a voice and platform to express themselves side by side with men will help the community grow. She says that women aren’t given the credit they deserve.

“Even when there are big decisions to be made, when there are issues in the community, sometimes it is the women who fix them. But, we still don’t give them the chance to express themselves,” she said. “If we give a woman the possibility to think, to speak and to plan her actions while in the presence of men, that woman will realize that she has the same rights as men.”

Reaching out to the community

Faye wasn’t only speaking to those in attendance at the meeting. The gathering was being broadcast in over 43 different communities across Senegal.

Diouf believes that radio is a great medium to reach people, because they cannot fix the problems in their community when they do not understand that there are issues in the first place.

She works with URAC, bringing together community radio stations that aim to empower people, and develop the economic, cultural, and social environments of their communities. Training sessions are held to teach people about their human rights. They also provide training to people who want to take their voice to the airwaves and practice good journalism. 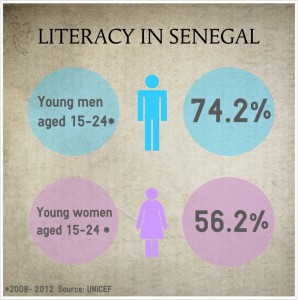 “When you are in a country where the majority of adults are not educated, with illiteracy amongst the youth, we realized that we had to create the tools that would allow us to speak to the population, tools that are accessible to everyone,” she said.

That’s exactly what they did. Their radio broadcasts reach 43 different communities, and they broadcast in the seven different national languages of Senegal.

Each week, the shows have themes. They talk about a specific social issue or convention, and they call on the public to call in to ask questions and create a discussion in the community.

There are many different voices heard during these broadcasts. Those who know a lot about the subject use the chance to call in to reflect on their knowledge and share with others. There are also the people who are unaware of their rights, and therefore unable to improve their living conditions. They usually call in with questions pertaining to their everyday life.

Diouf says it is important to actually hear what the people have to say, not only to give them a voice, but also to assess what knowledge they already harbour. This allows them to truly understand the audience they are speaking to, and what needs to be done to generate meaningful community conversation.

This approach to education is something she learned while participating in one of Equitas’ Sub-Regional Human Rights Training Sessions. These sessions are designed so that alumni networks can lead their own training programs using Equitas’ methodology.

Participants are introduced to the learning spiral method, a transformative approach that begins by  allowing the participants to share their own experiences. In more traditional educational environments, it is often the teacher who comes armed with the knowledge, and the students are expected to absorb it all.

With the learning spiral, it is more of a shared experience. The participants bring what they already know about human rights education and use this to connect with each other.  They build knowledge around what they have lived and experienced, and facilitators help the participants analyze patterns. The resulting discussions open doors to new ideas and perspectives on human rights issues.  Facilitators and resource persons introduce new knowledge and provide coaching to the participants as they plan how they will apply their learning to their day-to-day work.

“When we take the spiral learning method, it allows you to take into account not only what the participant already knows, but also to facilitate and guide them through it,” Diouf said.

It also allows those participating to think about how they can take these new ideas and approaches to human rights education, and put it into action in their own community.

Meanwhile, Diouf will continue to reach out to the community and spread the word to give women the courage to speak up publicly.

“It’s a way for women to say ‘we are going to decide in the same place as you [men], because that’s what it takes for our rights to be respected. That’s how equality works.’”

By Casandra De Masi, intern and web editor at Equitas

Did you like this story? Follow us for more! Equitas provides individuals the necessary tools to shape attitudes and positive behaviours, just as Awa Diouf is doing in Senegal. Give us your support! Even the smallest donation contributes to fulfilling Equitas’ mission. See how.

← Ending the bloodshed in Syria: a plea for dignity, freedom, and peace
Finding equilibrium in the fight for Human Rights →